The Swedish car maker hires Atif Rafiq to accelerate a digital transformation. At McDonald’s, Rafiq oversaw the launch of digital kiosks and table service at the fast-food chain. 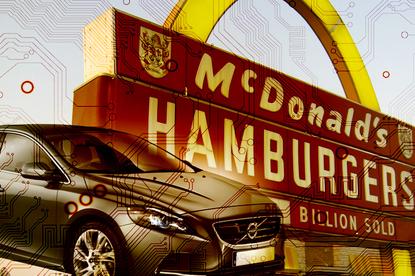 Volvo Cars, seeking to rev up digital projects such as autonomous driving and concierge services, has hired Atif Rafiq as its senior vice president IT and chief digital officer (CDO). Rafiq is joining the Swedish car maker from McDonald's, where he became the burger chain's first CDO in 2013. He replaces Klas Bendrik, senior vice president of IT, who will assist with the transition and leave the company.

Volvo said in a statement that Rafiq will oversee the company’s digital transformation, which includes adding consumer-facing applications and digital touchpoints, as well as enterprise systems supporting the company’s products, processes and services. The main challenge? Developing cars that are autonomous, electric and connected, says Håkan Samuelsson, president and chief executive, in a statement.

“The automotive industry is changing rapidly," Samuelsson says. "This means that Volvo must also change rapidly. Part of this involves rethinking how customers buy Volvo’s cars and then how they interact with them once they have bought them. Atif is ideally qualified to speed up our development in this area."

Volvo has embarked on several technology initiatives that seem progressive compared to other big-brand car manufacturers. The company is piloting a service that uses Bluetooth-enabled digital keys to let customers lock and unlock their vehicles from a mobile app.

The same digital key technology powers Volvo's Concierge Services, in which car-owners use a mobile app to request that third-party service providers fill up, wash or service their cars in other ways. Volvo began piloting this program in the Bay Area with 300 owners of new Volvo XC90 SUVs and S90 sedans in November.

Most ambitious of all is its self-driving car pilot, Drive Me. Beginning in 2017, 100 customers will drive Volvo XC90s equipped with Volvo's IntelliSafe Autopilot technology on Swedish roads, with a goal for broader adoption by 2020. Volvo has also struck a $300 million alliance with Uber to develop self-driving cars.

Rafiq, who in a Dec. 2 LinkedIn post pointed to those initiatives as a reason for taking the role:, "Speed, more than size, matter in this era. Tesla demonstrated that fact and Volvo is nibling [sic] at the heels while also being ahead when it comes to scale and the finer aspects of building cars. This bodes well for Volvo's future in the dynamic automotive sector, which is pivoting to a new era of mobility."

Beefing up digital at Mickey D’s

Rafiq has extensive experience preparing for his new CDO role. At McDonald's, Rafiq launched on-demand delivery, piloted power charging stations and upgraded its mobile app with check-in and other capabilities. Rafiq also introduced digital ordering and table service in more than 2,600 locations worldwide. The service, which relies on Bluetooth technology to show workers where a customer is sitting, is expanding to 14,000 restaurants. And Rafiq conceived of the company’s omnichannel strategy and facilitated a new CRM system supported by the company’s first large scale database of customer profiles and relationships.

[ Related: Warning: CDOs can be hazardous to your CIO's health ]

McDonald's lured Rafiq from Amazon.com, where he led the Kindle unit's direct publishing business. He previously held general management positions at Yahoo and AOL. Rafiq was also the co-founder and CEO of content management startup Covigna and has advised, invested and served on the boards of over 10 startups.

Action around the CDO role is heating up, as Rafiq is one of several digital chiefs hired in recent months.