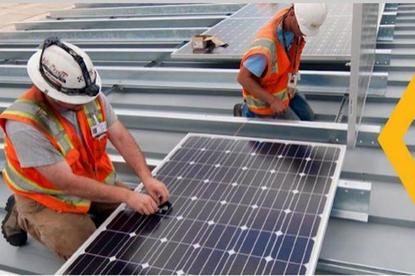 Solar employment now accounts for the largest share of workers in the U.S. power generation field, surpassing coal, gas and oil, according to a new report from the U.S. Department of Energy (DOE).

In 2016, the solar workforce increased by 25% over the previous year to 374,000 employees, compared to 187,117 electrical generation jobs in the coal, gas and oil industries combined, according to the DOE's "Energy and Employment Report for 2017".

Employment in the wind turbine industry increased to 102,000 workers, a 32% increase over the previous year, the report said.

In all, 2.2 million Americans are employed in the design, installation and manufacture of energy efficiency products and services, according to DOE.

Solar employment, which includes both photovoltaic electricity and concentrated solar steam generators, accounts for 43% of the electric power generation workforce -- the largest share of workers in that market. Fossil fuel generation employment now accounts for 22%.

The majority of new power sources are coming from three main markets: solar (9.5GW), natural gas (8GW), and wind (6.8GW). Together, those three make up 93% of total additions, the DOE said.

Shifts in electric generation sources are mirrored in the market's changing employment percentages, as the share of natural gas, solar, and wind workers continues to grow, while coal mining and other related employment is declining.

"It is important to note, however, that the majority of U.S. electrical generation continues to come from fossil fuels (coal and natural gas) and that, under latest [Energy Information Administration] modeling in the Annual Energy Outlook 2016, will continue to provide 53% of total U.S. electricity in 2040," the report stated.

Electric power generation employment now stands at 860,869 jobs, an increase of 13% from last year, and employers expect 7% growth over the next 12 months, the DOE said.

Solar industry employment has been steadily increasing since 2010, according to the 2015 Solar Job Census. That report was prepared by the Solar Foundation and market research firm BW Research Partnership with support from The George Washington University.

In 2015, the solar power industry created 31,000 jobs, a growth rate that was 20 times the national average for other industries, according to the fifth installment of the Solar Jobs Census. The 2015 census showed that the installation and maintenance of solar power supported more than 173,000 jobs. Accounting for some additional jobs in the component and materials supply chain, as well as the industry's spillover effects, there are now more than 705,000 jobs related to solar power.

Since the first Solar Jobs Census in 2010, solar industry employment has grown by 86%.

The DOE report highlights how the electric generation mix in the U.S. is changing, driven by the transition of coal-fired power plants to natural gas and the increase in low carbon sources of energy.

"This transition has required significant build-out of new power generation facilities and technologies in the United States. According to the Energy Information Administration, electric generation technologies are expected to add over 26 gigawatts (GW) of utility-scale capacity over 2016," the report said.