​When will the IT project madness end? 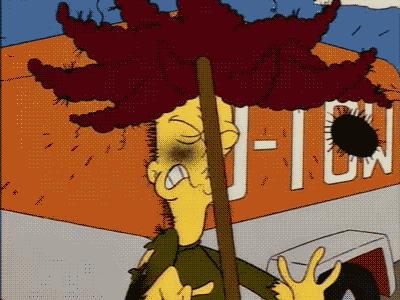 There is a scene in the fifth season of The Simpsons called Cape Feare where Bart Simpson’s nemesis Sideshow Bob – beautifully voiced by Kelsey Grammar – steps on a rake. Then another, and another, and another. In fact he steps on rakes for fully 30 seconds. Each one hits him in the face, after which he grimaces and then duly steps on another rake.


When I first saw this episode, I thought this 30 second routine was hilarious and yet at the same time it was a sad indictment of what Sideshow Bob had become.

Someone, devoid of new ideas, who made the same mistakes over and over again and ultimately ended up back in prison.

Continually stepping on rakes is a perfect metaphor for the continued project failure that we see in the public service. Unfortunately, however, none of these cartoon villains end up in prison. Instead they remain at large ‘in the system’, ready to fail taxpayers again.

The Brisbane City Council $60m blowout is just the latest in a long line of examples of senior leaders in well paid positions ignoring the advice and reviews of thousands before them and betraying common sense by leading a project to failure.

They’ll do it again, as there appears to be no consequence for doing so, which leads me to ask the question, ‘when will this project madness end?’

In August 2015, Peter Shergold released his report into the continuing failure of Australian Public Service projects and made a series of conclusions. I’d argue that his language should have been stronger and he should have made recommendations, however, I’m sure there’s some political nonsense that stopped that from happening.

He was damning in his assessment of the maturity of senior executives and program and project managers alike, saying, amongst other things:

“Of the 20 capability reviews conducted by the APSC (Australian Public Service Commission) and released to date, 11 have noted that departments struggle with project management skills and program management practices.”

“Program and project management are too often seen as control activities based on templates and Gantt charts. They are actually creative processes.”

“Legislation will not change culture: people and their actions do.”

“Valuing leadership in program and project management will strengthen the public service as an effective, professional and resilient institution.”

Ah yes, leadership and culture – the two most important factors in getting projects delivered, yet routinely ignored by bureaucrats as ‘fluffy stuff’ or whatever the hell else they want to call it.

‘Follow the process and we’ll achieve consistency of delivery’, ‘Adhere to the framework and you’ll be successful.’ ‘We’re a PRINCE2 shop.’ ‘We need to be more agile.’ Process, process, process.

Here’s the thing, the process is only good as the people that use it and according to Shergold and the worldwide statistics for IT project success (it was an appalling 29 per cent in 2015), most of them aren’t good enough.

Sure they have a certificate that says that understand a method, but where’s the feedback from those who have worked with them that demonstrates they’re able to be a role model for others?

That demonstrates that they’re able to keep their emotions in check, continually strive to be the best version of themselves and create the kind of environments where people can perform their job to the best of their abilities?

All that process counts for nothing if the people sponsoring and managing projects don’t have the personality, planning skills or ethical responsibility to lead from the front.

In its 2015 Chaos Report (which analyses over 280,000 IT projects worldwide), The Standish Group said: “Over the last 20 years the project management field has experienced increasing layers of project management processes, tools, governance, compliance and oversight. Yet these activities and products have done nothing to improve project success.”

Nothing. Not. One Thing. Yet the public service continues to invest in them and not in the things that matter: leadership and culture building skills.

The best projects are a result of the person that leads it or the environment they create. It always has been that way and always will be. Project managers and sponsors need to make the decision to change and become role models for transformation. Where they choose not to, then they should be removed from the role and performance managed, not allowed to drag the team and agency down with them.

For too long, these poorly performing people have failed to build the kinds of teams that are able to fulfil the promises made to taxpayers. Or whose decisions are made in the name of speed or political positioning. The Census project and the disastrous East-West Link project are great examples of this.

They continue to make excuses, ‘the scope expanded’, ‘there were lots of unknowns’, ‘the risks were greater than we first thought’, ‘interest rate fluctuations really damaged our budget planning’, rather than fronting up to the taxpayer and admitting they got it wrong.

The Victorian Ombudsman in its report into the top ten IT project failures in Victoria in 2011 said: “Ultimately, accountability for these projects rests with the principal officer of the agency. If the project runs over budget and time, and fails to deliver, then they should be held to account.”

If that happened more often and we saw some public accountability for the blatant ignorance of past project failures and a lack of investment into the skills that actually matter, then maybe, just maybe, this IT project madness will end.

Colin Ellis is the author of The Conscious Project Leader and works with organisations around the world to transform their project cultures and help them deliver projects successfully every time. You can find out more about him and his work at www.colindellis.com.