Even with federal support, coal will likely be too expensive to compete with renewable energy 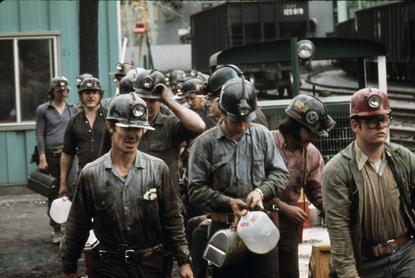 The nation's energy policies appear to be ready to change drastically under President Donald Trump's administration.

The plan called for accessing "the estimated $50 trillion in untapped shale, oil, and natural gas reserves, especially those on federal lands that the American people own. We will use the revenues from energy production to rebuild our roads, schools, bridges and public infrastructure. Less expensive energy will be a big boost to American agriculture, as well."

Another goal of the plan is to achieve "energy independence" from what the White House statement described as the "OPEC cartel and any nations hostile to our interests."

The plan will also promote clean coal technology, and reviving America's coal industry, "which has been hurting for too long."

The White House's energy plan came on the same day a report claimed the solar industry now employs more than twice as many as does the coal industry, slightly more than the oil industry, and five times as many people as in the nuclear energy market.

The report -- from The Solar Foundation -- claimed last year's growth in the solar industry outpaced the overall U.S. economy by 17 times.

Last month, the U.S. Department of Energy published a report showing jobs in the solar field surpassed those in the coal industry.

In 2016, the solar workforce increased by 25% over the previous year, to 374,000 employees, compared to 187,117 electrical generation jobs in the coal, gas and oil industries combined, according to the DOE's "Energy and Employment Report for 2017."

Industry experts have also noted that the coal industry isn’t likely to revive its previous output because it's simply too expensive compared with the cost of producing renewable energy.

The Trump Administration's energy plan did point out that the need for energy "must go hand-in-hand with responsible stewardship of the environment."

"Protecting clean air and clean water, conserving our natural habitats, and preserving our natural reserves and resources will remain a high priority. President Trump will refocus the EPA on its essential mission of protecting our air and water," the plan stated.

The White House did not respond to a request for comment from Computerworld.

In 2015, the average number of employees at U.S. coal mines decreased 12%, to 65,971 employees, the lowest on record since the Energy Information Agency began collecting data in 1978. Coal production decreased for the fourth year in a row, to 1,165 million tons, a decline of 6.3% from 2014 levels.

By comparison, in 2015, new installations of solar power capacity surpassed both wind and coal for the second year in a row, accounting for 32% of all new electrical capacity, according to a new report from GTM Research.

There is a concern, analysts said, that the Trump Administration will roll back the 30% Investment Tax Credit (ITC) for solar, which was passed in a bipartisan agreement and extended through 2019. After that, the tax credit will decline to 10% by 2022 in return for lifting the oil export ban.

The rollback "could happen, but [is] unlikely, due to the bipartisan nature of how the extension was passed in Congress and the momentum solar has right now," said Raj Prabhu, CEO of the Mercom Capital Group, a clean energy research firm. "Solar has gone mainstream with utilities, businesses, and homeowners, not to mention that solar jobs exceed over 200,000."

The administration also made available to single-family housing Property-Assessed Clean Energy financing, which made it easier for homeowners to invest in clean energy technologies. Obama also created the Department of Defense's Privatized Housing Solar Challenge, spurring private companies to commit to providing solar power to housing on over 40 military bases across the country -- with a goal of installing 300MW by 2020.

The Obama administration also made available $24 million for 11 projects in seven states to develop innovative solar technologies that double the amount of energy each solar panel can produce from the sun.

In addition, the Environmental Protection Agency created the Clean Power Plan, a policy aimed at combating global warming. Under that plan, the federal government set a goal of reducing carbon emissions in 2025 by 26% to 28% below 2005 levels and increasing the share of renewables in their respective electricity generation mixes to the level of 20% by 2030.

In 2014, the United States brought online as much solar energy every three weeks as it did in all of 2008, and the solar industry added jobs 10 times faster than the rest of the economy, according to a White House statement. Since the beginning of 2010, the average cost of a solar electric system has dropped by 50%. In fact, distributed solar prices fell by 10% to 20% in 2014 alone, and currently 44 states have pricing structures that encourage increased use of distributed energy resources.

National Public Radio noted in a news article that Trump's "America First Energy Plan" is similar to a speech he made last month before Republicans gathered in Philadelphia.

"We will unleash the full power of American energy, ending the job-killing restrictions on shale, oil natural gas and clean, beautiful coal. And we're going to put our coal miners back to work," Trump said.