On the same day, the government’s minister for cities and digital transformation, Angus Taylor, lauds the DTA’s power to review and oversee projects. 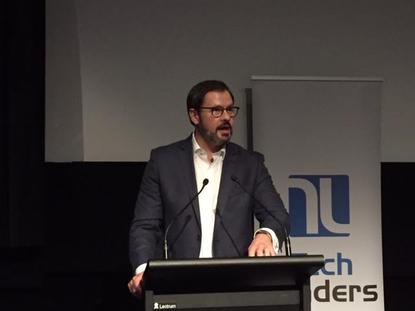 Federal Labor MP Ed Husic said on Sunday that although the opposition is offering bipartisan support for the government’s digital transformation agenda, it can’t be silent as the “debris starts to pile up.”

In a speech at the Tech Leaders forum in the Blue Mountains focused on how Australia can manage the impact of automation and respond to technological change, Husic said government had delivered an innovation agenda at a “withering standstill”.

“We have a lot to be concerned about. The government has delivered fibre to a brick wall … what can I say about government digital transformation that hasn’t been drowned in tears already,” Husic said.

“The [government’s] track record is hardly right for us to stand on the sidelines and act as cheerleaders.”

Husic was responding to an earlier presentation by the government’s minister for cities and digital transformation, Angus Taylor.

“I understand Angus Taylor has been here before evangelising about the glory of the government’s digital transformation process – progress that in the last 12 months has heralded the Census fail, the Centrelink robo-debt debacle that lobbed debt collectors on the doorsteps of old aged pensions and the Australian Tax Office website crashing on three occasions. And with little immediate explanation for it, we lose over 1 petabyte of data and we have no idea about how much of it is being restored,” said Husic.

Husic went harder, drawing his inspiration from Wired magazine’s obituary for Microsoft’s Zune music service. “I will say, digital transformation from this government has undergone an ‘unnecessarily slow and cruel death.’”

During his presentation, Taylor lauded digital projects such as the Department of Immigration and Border Protection’s SmartGate system at Sydney Airport, and a project to combine information from the NationalMap and data.gov.au to create world-leading open data infrastructure.

He was adamant that the government had learned “real lessons” from the Census debacle and recent outages at the Australian Taxation Office and these were leading to reforms in the system.

“No government of either stripe has had the strategic overview that this government is now constructing into the Australian people’s multi-billion dollar investment in IT.”

Taylor promised that after years of stagnation in IT spend across government, which had allowed systems to become badly run down, the government had invested $3 billion more in ICT over the last 12 months than the previous year. This equated to a $9 billion annual spend, he said.

This doesn’t mean there won’t be issues with IT rollouts across government, he said.

“Anyone like me who has spent their life around mature IT projects and startups that have defined much of my career knows that there will always be issues. Issues in IT implementation, can, do, and will happen.

“But importantly, what we are positioning the government to do is manage risk better than any government in the past, deal with the issues expeditiously, increase the likelihood of success of projects, and learn from our mistakes,” he said.

Taylor said the government is now "squarely focused" on applying agile methodologies to new IT projects and where possible to existing implementations.

"Before the DTA, agile was largely unknown within the Commonwealth. We are working to break up projects to better understand our technology investment and to work with ministers and agencies to ... break them up into much smaller digestible pieces," he said.