Should your next big hire be a chief A.I. officer? 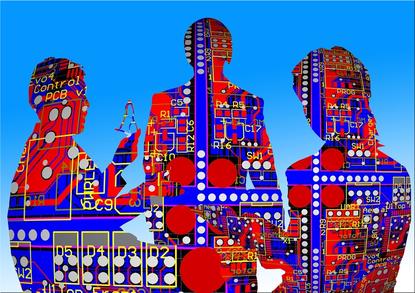 As companies increasingly turn to artificial intelligence to communicate with customers, make sense of big data and find answers to vexing questions, some say it's time to think about hiring a chief A.I. officer.

A chief artificial intelligence Officer – or CAIO -- could round out your C-level execs, sitting at the big table with your CIO, CFO, CTO and CEO.

[ For more on A.I. in the workplace, see Computerworld’s Artificial intelligence in the enterprise: It’s on. ]

"A.I. is going to be really important to some companies – enough to have top officers who will focus on just that," said Steve Chien, head of the artificial intelligence group for NASA's Jet Propulsion Laboratory in Pasadena, Calif. "And beyond that, you'll want every employee thinking about how A.I. can improve what they do and you'll want a chief A.I. officer overseeing all of that. They should be constantly thinking about how A.I. can improve things."

Chien said there's growing interest in seating CAIOs at large companies. He's noticed this firsthand because he's been getting calls from head hunters looking to recruit him for the jobs.

While he hasn't taken the bait and loves his job at JPL, where he works with autonomous systems for space exploration, Chien said he's been approached by airlines, food manufacturers, mining companies and pharmaceuticals.

Not all of those companies were looking specifically for an executive-level manager, but they all were looking for someone to oversee artificial intelligence efforts, regardless of the job title.

The JPL doesn't have a CAIO, but Chien said there have been discussions about the need for one in an organization so focused on machine learning, A.I., autonomy and robotics.

With interest in the use of A.I. growing at companies, it could make sense to have someone in charge of its use. According to a Forrester Research 2016 survey of 3,343 global data and analytics decision-makers, 41% of companies around the world are investing in A.I. and 20% are planning to invest in the technology next year.

"A.I. is still immature and evolving quickly, so it is unreasonable to expect everyone in the C-suite to understand it completely," wrote Andrew Ng, a renowned A.I. scientist, in an article posted in November in the Harvard Business Review. "But if your industry generates a large amount of data, there is a good chance that A.I. can be used to transform that data into value. To the majority of companies that have data but lack deep A.I. knowledge, I recommend hiring a chief A.I. officer or a VP of A.I."

Ng founded and led the Google Brain Deep Learning Project from 2011 to 2012 and was chief scientist at Chinese search company Baidu from 2014 to March of this year. Today he is an adjunct professor at Stanford University.

Since he's moving out of his position at Baidu, Ng said he's not doing interviews and that the article he wrote in November represents his views on the future of CAIOs.

"The benefit of a chief A.I. officer is having someone who can make sure A.I. gets applied across silos," Ng wrote. "A dedicated A.I. team has a higher chance of attracting A.I. talent and maintaining standards… But the dedicated team needs leadership, and I am seeing more companies hire senior A.I. leaders to build up A.I. teams across functions."

Not everyone agrees, however.

"I believe in the promise of A.I., but it will be embedded in each line of business, and those lines of business will own those specific instances of A.I.," he said. "I don't think it will need its own chief. The person I think should spearhead A.I. is the chief data officer or the chief analytics officer because they understand how machine learning works."

Purcell added that he envisions big tech companies like Google, Facebook, Microsoft, Amazon and Apple having a CAIO because so much of their work will increasingly depend on A.I.

However, that won't be the case for most companies, not for a while anyway.

Whit Andrews, an analyst with Gartner, said the position is largely unneeded.

"Organizations should be turning to the chief data officer to serve the role of chief A.I. officer," he said. "If you don't have a chief data officer, why is that?... I need a person to whom I can turn who will guide us through this difficult moment,and that makes perfect sense but that does not mean you should have a chief officer for everything."

A chief data officer, according to Andrews, would handle the infrastructure for A.I. and the data needed for it to work.

He said large finance companies, as well as companies involved with autonomous vehicles, gas and oil, health care and manufacturing might need a CAIO, but they wouldn't be the norm.

"Companies don't need A.I. as much as they think they do," Andrews said. "No matter whether or not you really want A.I., your chief data officer is the best place to go to deliver A.I. to your organization."

"I think some people just don't see how big A.I. is going to be," Chien said. "I think they're being responsive rather than visionary." Having a chief data officer, who would likely already have his or her hands full, take on artificial intelligence as well, could be a mistake, he said.

"I think there's a lot of downsides to that view," he argued. "Some companies may go that way but it's at their own peril… My point is it's much beyond passive archiving or even data mining. It's exploiting the knowledge from that data."

They also would monitor A.I. strategy and use, and make course corrections as needed. That alone, would be a lot of work, according to Chien.