The comments don't appear to be the work of real people 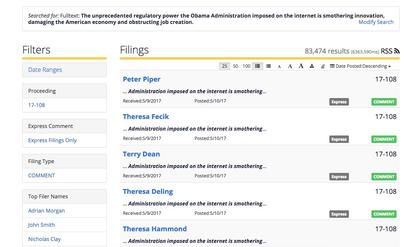 Some supporters of a U.S. Federal Communications Commission plan to repeal its recent net neutrality rules have apparently resorted to dirty tricks.

An apparent bot-generated campaign has posted more than 83,400 comments on the FCC's website supporting the agency's plan to gut its own net neutrality rules.

A handful of people whose names are on the bot-generated comments have denied making the comments, according to a report by ZDNet. The 83,400 comments, filed to the FCC's comment system between Monday and Wednesday, all contain the same text, reading in part:

"The unprecedented regulatory power the Obama Administration imposed on the internet is smothering innovation, damaging the American economy and obstructing job creation. I urge the Federal Communications Commission to end the bureaucratic regulatory overreach of the internet ... and restore the bipartisan light-touch regulatory consensus that enabled the internet to flourish for more than 20 years."

That argument echoes the criticism by broadband providers, conservative groups, and many Republicans about the FCC's 2015 net neutrality rules.

An FCC spokesman declined to talk about the apparent bot attack. "We’re not commenting on the comments at this time," he said by email.

The FCC has received more than 730,000 public comments on Chairman Ajit Pai's proposal to roll back the 2-year-old rules, which classified broadband as a regulated telecom-like service and prohibited providers from selectively blocking or slowing web traffic. These identical comments represent more than 11 percent of the total.

It's not uncommon for the FCC to receive similar comments, or even the exact same language, in submissions from the public. Groups urging the public to comment on FCC proceedings, including net neutrality supporters, often provide sample language or partially automated ways to submit a comment. What's different here is the people whose names are on these comments appear to have not filed them.

When the FCC first moved to pass the strict net neutrality rules in 2014, it received more than 4 million public comments, a record for the agency for any one proceeding. A large majority of comments then supported strong net neutrality regulations. This computer-generated campaign appears to be an attempt to change that narrative.

The flood of comments comes after commentator John Oliver, during his Sunday episode of "Last Week Tonight," called on the public to flood the FCC with comments supporting the 2015 rules.

Late Sunday and early Monday, the FCC claimed to be hit with a distributed denial-of-service (DDoS) attack that may have prevented some people from filing comments, but some critics have suggested the FCC's website may have simply buckled under the weight of the traffic from Oliver viewers.

On Tuesday, Senators Ron Wyden, an Oregon Democrat, and Sen. Brian Schatz, a Hawaii Democrat, sent a letter to the FCC with questions about the apparent DDoS attack.

The two, both supporters of the existing net neutrality rules, asked the FCC to provide details about the attack. "To the extent that the FCC already has evidence suggesting which actor(s) may have been responsible for the attacks, please provide that in your response," they wrote.

The two also asked about the effect on people trying to comment on Pai's proposal. "Do you have an estimate of how many individuals were unable to access the FCC website or submit comments during the attacks?" they asked. "Were any comments lost or otherwise affected?"