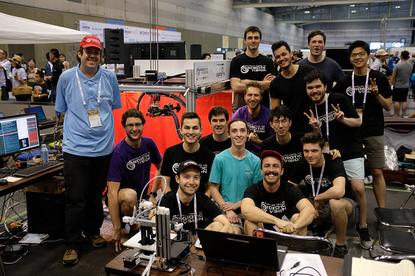 A robot built by engineers from the Australian Centre for Robotic Vision (ACRV), and held together in part by cable ties, has won an international competition backed by online retailer Amazon.

The ACRV group – made up of 27 roboticists from Queensland University of Technology, The University of Adelaide and the Australian National University – beat 15 other teams to take home the AUD$100,280 prize money.

The Amazon Robotics Challenge, hosted in Japan over the weekend, is designed to fill a gap in Amazon.com’s automated warehousing processes.

While Amazon is able to quickly package and ship millions of items to customers from a network of fulfillment centers, the technologies to enable robots to pick items and stow them in boxes in an unstructured environment are yet to be developed, the company said. The company has hosted the competition since 2015.

The robots were scored on how many items they successfully picked and stowed in a fixed amount of time, testing their abilities in object recognition, pose recognition, grasp planning, compliant manipulation, motion planning, task planning, task execution, and error detection and recovery.

In the finals, the ACRV team and their robot Cartman was placed fifth after initial stowing and picking rounds, with the bot suffering a 'broken wrist'. Then came a stunning comeback in the combined challenge.

“It was a tense few hours. Our team top scored early with 272 points on the final combined stowing and picking task but we then had to wait on the results for five other teams, many of whom had outperformed us in the rounds,” said the centre’s COO Dr Sue Keay.

“Not bad for a robot that was only unpacked and reassembled out of suitcases a few days before the event, with at least one key component held together with cable ties.”

Very cool to see. The Australian Centre For Robotic Vision comes from behind to win the #AmazonRoboticsChallenge! @AmazonRobotics pic.twitter.com/m5k3TDzpT1

The teams were given details of some of the products to be sorted and packed in advance, while others were shared with just half an hour warning. Points were given for correctly placed items and speed, and docked for dropped items and any damage.

“We had to create a robust vision system to cope with objects that we only got to see during the competition. Our vision system had the perfect trade-off of training data, training time and accuracy,” said Dr Anton Milan, University of Adelaide-based team member. “One feature of our system was that it worked off a very small amount of hand annotated training data. We only needed just seven images of each unseen item for us to be able to detect them.”

Cartman was the only cartesian robot in the final and took around 15,000 hours to build. A cartesian robot (sometimes known as a gantry robot) is one that has three axes of movement that are linear and at right angles to each other.

“You won’t believe how hard is it to teach a robot to see a clear bottle of water among a bunch of groceries, or teach it the best way to pick up a bag of marbles,” said Team ACRV leader Dr Juxi Leitner.

“We opted to build our own robot from scratch – a three-axis Cartesian robot that acts much like a gantry crane you see at ports. With six degrees of articulation and both a claw and suction gripper, Cartman gives us more flexibility to complete the tasks than an off-the-shelf robot can offer. The robot is robust and tackles the task in an innovative way and is also cost effective. I think it would have been the lowest cost robot at the event!"

In April, Amazon announced it would be setting up operations in Australia ‘soon’. Its first distribution centre will be in Melbourne, it has been reported.

QUT retail and logistics expert Associate Professor Gary Mortimer said advanced robots like Cartman could be a game changer for the ecommerce giant.

“Amazon, in its current form, isn’t likely to make a massive impact on Australia’s retail market because we only buy about seven per cent of our goods online, and because geographical distances and higher wages increase logistics costs,” Professor Mortimer said. “If Amazon can reduce the cost of doing business in Australia by automating the picking and stowing process, it could very well increase its market penetration.”