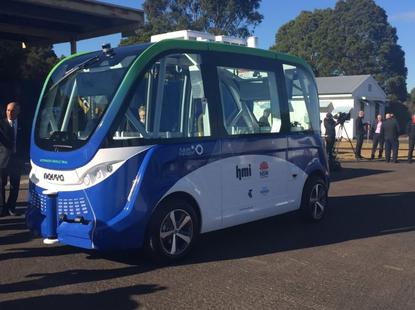 Trials of a driverless passenger bus are about to commence at a site close to Sydney Olympic Park.

The two-year trial, due to start later this month, will test ‘a highly automated passenger shuttle’ on an enclosed off-road environment at Newington Armory.

The shuttle will use Light Detection and Ranging (LIDAR), GPS and stereovision cameras to follow a pre-programmed route.

The vehicle being used in the trial is produced by French firm Navyatech. The company's vehicles are currently being used in trials at Christchurch Airport and sites in Europe.

“The trial will focus on observing how automated vehicle technology can improve the mobility of customers and interact with other people within the precinct,” Transport for NSW, the lead agency for the experiment, said.

“To enable this trial we will work with our partners to understand what supporting technology and infrastructure is needed to operate an automated shuttle in this environment, how it interacts with other precinct users – pedestrians, cyclists etc. – and how it integrates with the broader transport network. We will also better understand passengers’ responses to this type of vehicle and the services it can enable, like on-demand transport in off-peak times.”

The project is being handled through the New South Wales Government's Smart Innovation Centre, and backed by a partnership between Transport for NSW and NSW Roads and Maritime Services, as well as private industry partners; HMI Technologies, Telstra, NRMA Motoring and Services, Sydney Olympic Park Authority and IAG.

The second stage of the trial, due to start in the last quarter of the year will take place at a closed-off section of Sydney Olympic Park. Passengers will be able to take trips on the automated vehicle at the beginning of 2018.

“Today we drive our cars but the reality is, cars will soon drive us and while we are not there yet, we need to be prepared for this change and we need to stay ahead of the game,” said NSW Transport Minister Andrew Constance.

“The ultimate goal of the trial is to find the best way to harness the next generation of driverless technology and how to make it work for NSW while also answering questions about how it can improve safety and reliability.”

Largest shift since cart to car

The first trials of autonomous vehicles on public roads were staged in South Australia in 2015 after the state introduced laws to make the tests legal. In March, the New South Wales government revealed plans to introduce legislation to facilitate safe and legal trials for connected and automated vehicles.

The Transport Legislation Amendment (Automated Vehicle Trials and Innovation) Bill 2017, is currently moving through the NSW parliament and received its second reading yesterday. Once passed, the driverless shuttle trials will be able to proceed.

Introducing the bill, Minister for Roads, Maritime and Freight Melinda Pavey said its purpose was to establish a legislative framework to provide for the safe testing of connected and highly automated vehicle technology in the state.

"The transition to automated vehicles is likely to be the largest shift in transport history since the transition from horse and cart. The promise of unprecedented mobility and affordability, the creation of new jobs and industries, the economic productivity boost and the reduction of congestion, emissions, injuries and deaths is real but yet to be realised," she said.

"With much to do before this can become a reality, this bill will ensure that the people of New South Wales are included on this journey and are ready to embrace this technology and all the benefits and opportunities that may unfold as it matures."