Having survived kidnapping and torture, Alicia Kozakiewicz is now warning children and parents of online dangers 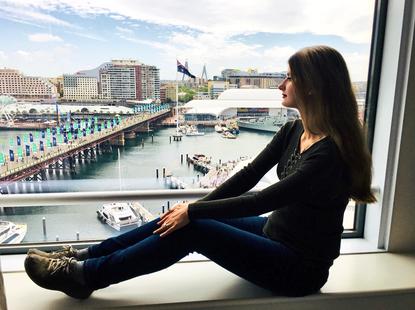 A “middle school utopia” is how Alicia Kozakiewicz remembers the Yahoo chatrooms of the early noughties.

“I can remember my friends, they no longer wanted to go to the park or the mall or the movies," she says. "They wanted to stay indoors and go online…the popular kids were talking to the not so popular kids. Everybody was getting along," she said.

Spending time online was how the then 13-year-old stayed connected with friends and met new ones.

“It was our own little clubhouse. Instead of three-way calling it was the whole school calling. And that was pretty neat,” Kozakiewicz remembers. “I talked to my friends from school who introduced me to their friends and their friends, and their friends, until I was talking to people I didn’t really know all that well in a chat room, but we all felt connected.”

There was one boy in particular with whom Kozakiewicz made a special connection. He would listen to her problems, tell her she was special. He even liked the same boy bands Kozakiewicz was into: “He was the coolest boy ever because of that”.

On New Year’s Day 2002, Kozakiewicz excused herself from a family dinner saying she felt sick. She sneaked out the front door, leaving it open behind her, to say hello to the “coolest boy” in person.

Waiting for her outside was a 38-year-old computer programmer named Scott Tyree.

Obsessed with this view from my @hyattregency hotel room overlooking Darling Harbor. ⛴ pic.twitter.com/sjV1CN8b16

Kozakiewicz is now 29, an actress and model, a forensic psychology graduate and an experienced public speaker. She must have given this presentation a hundred times, but one slide still makes her stumble.

“I can’t look at this picture for long,” she told the audience at the Australian Information Security Association (AISA) conference in Sydney last week.

The photo shows a rack full of whips, paddles, collars and chains.

Having grabbed her outside her family home – “this man was squeezing my hand so tightly I thought it was broken. And he was barking commands at me: ‘Be good. Be quite. The trunk's laid out for you’,” Kozakiewicz recalls – Tyree drove the thirteen year old for five and a half hours from Pittsburgh, Pennsylvania to his Virginia home.

The image was taken from within Tyree’s basement dungeon where Kozakiewicz was chained to the floor, raped, beaten and tortured for four days.

“He was a monster. He kept me chained to the floor with a locking dog collar. He had broken my nose in one of the struggles and he didn’t feed me,” Kozakiewicz said.

“I did whatever I had to do to survive. No matter how brutal or humiliating or disgusting or painful I did it. Because I knew that as soon as I was no longer of use to him he was going to kill me.”

On the fourth day, Tyree told the 13-year-old: “I’m beginning to like you too much. Tonight we’re going to go for a ride”. He then fed her for the first time.

“I knew at that point it was game over. And then he left for work,” Kozakiewicz remembers.

The fact Kozakiewicz is alive, she says, is “a miracle”. Her saviour, if you can call him that, was another monster.

Drifting into a traumatised numbness, Kozakiewicz remembers coming to to the sound of angry voices banging at a door. She thought it was the people Tyree had sent to kill her.

“I thought this is it. This is the moment I’m going to die,” she recalls.

It was the FBI. Tyree had been sending details of the kidnapping and images of his abuse to others in Yahoo chatrooms. One recipient, in Florida, recognised Kozakiewicz’s face from a missing person’s story on a local Pittsburgh newspaper website and alerted the police via an anonymous call from a payphone.

Knowing Tyree’s chat handle, the FBI were able to trace him to his IP address.

One FBI officer told Kozakiewicz it was the first time in his 11 years of missing child investigations that hadn’t ended by pulling a body from the ground.

“It’s an absolute miracle,” Kozakiewicz says again. Her mother Mary agrees. Mary came to Australia with her only daughter last week, and sat in the front row during the talk taking pictures.

Scott Tyree was sentenced to nearly 20 years in prison.

Kozakiewicz says that at the time of her incident there were no cautionary tales for young people about the dangers of the internet.

Although the warnings are now there, the risks are even greater. More children than ever before have access to the internet and use it regularly, many through their own devices.

In Australia under 13s spend 19 hours a week online, and teens between 14 and 17, 33 hours, according to research by the Government’s Office of the Children’s eSafety Commissioner (with whom Kozakiewicz met during her visit).

Inspiring visit today from @itsaliciakozak whose story and work @AliciaProject motivates all of us as sisters & brothers in arms in #esafety pic.twitter.com/BdtUwIIYCX

More than a third of kids (aged eight to 13) online use social media, along with 82 per cent of teens (aged 14 to 17) online. On those platforms 47 per cent of kids and 58 per cent of teens share images of themselves, with many also sharing their last name, real age, school and phone number.

According to latest figures, in the 12 months to June 2016 five per cent of kids and nine per cent of teens were contacted online by strangers. Global statistics are similarly alarming.

Laws have been passed in Australia to crackdown on online predators. Earlier this year Carly’s Law was enacted, making it a crime to plan to harm a child under 16 and in particular targets predators who misrepresent their age.

The law is named after 15-year-old Carly Ryan, who was murdered 10 years ago on the beach at Port Elliot near Adelaide by a 50-year-old paedophile who pretended online to be 20 in order to lure her to a meeting.

In August, those laws were used for the first time.

Although changes to the law help, Kozakiewicz said (in the US, Alicia’s Law provides a stream of state-specific funding to the Internet Crimes Against Children task forces and has been passed in eight states), protecting children online starts with education.

“It’s not easy. Kids are hard to talk to. But we have to start somewhere. We have to educate our kids,” she said.

“We have to tell them about the dangers that are out there. It’s not something we can sweep under the rug. Just as we have to teach our kids to look both ways before they cross the street. We have to teach them that the internet can be dangerous. Not that it has to be, but it can be.”

The Office of the Children’s eSafety Commissioner has produced a range of material for parents around how to keep their children safe online. Awareness is growing: in a survey last year, 70 per cent of parents said they monitored children’s online usage, 59 per cent limited access, 79 per cent had rules of use and 79 per cent had spoken to their children about their online activity.

Half of parents considered contact with strangers a risk of their child being online.

Kozakiewicz now spends much of her time speaking at conferences and schools about her experience and how to be safe online.

“Abduction is the far end of the spectrum, but there are so many other ways that kids can fall victim,” she said. “Helping others has been the one thing that has helped me to find healing: to take this horrible awful disgusting thing that happened and to give it a purpose, to give it a reason.”

Huge thanks, @AISA_National, for bringing me here to share my story, mission & inspiration. Amazing audience. Can’t wait to come back! ❤️ pic.twitter.com/lmAiWLIqtb