Total revenue fell 0.4 per cent to US$19.15 billion from a year earlier 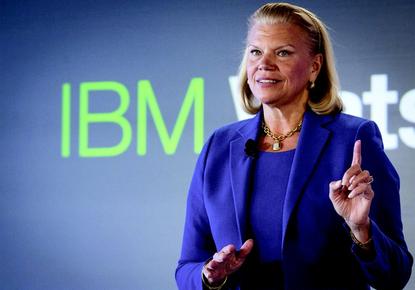 IBM’s shift to newer businesses such as cloud and security services helped it beat analysts’ quarterly revenue estimates, and the company said its latest mainframe is getting "enthusiastic adoption".

The company's shares rose nearly five per cent to US$152.80 in extended trading on 17 October.

Revenue in the company's mainframe business jumped 60 per cent in the third quarter, chief financial officer, Martin Schroeter, said, adding that the business benefited from the newly launched Z14.

The company began shipping the new systems towards the end of September.

Under CEO, Ginni Rometty, IBM has in recent years shifted focus to growth areas across its businesses, such as cloud, cybersecurity and data analytics, to counter a slowdown in its legacy hardware and software businesses.

Revenue from these businesses, which IBM calls its "strategic imperatives", climbed 11 per cent to US$8.8 billion in the third quarter ended 30 September.

Total revenue fell 0.4 per cent to US$19.15 billion from a year earlier, marking the smallest quarterly drop since the third quarter of 2016.

IBM's revenue declined for the 22nd quarter in a row as the company continues to exit some legacy businesses, while bolstering its "strategic imperatives".

Analysts on average had expected revenue of US$18.60 billion, according to Thomson Reuters.

Excluding one-time items, IBM earned US$3.30 per share, beating analysts' estimates of US$3.28.