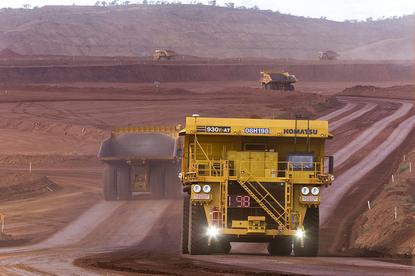 Some 29 Komatsu haul trucks will be retrofitted with Autonomous Haulage System (AHS) technology at the mine in the Pilbara region of Western Australia from next year.

The company will also be converting 19 Caterpillar haul trucks at its Marandoo mine to autonomous from mid next year, the first time Rio Tinto has deployed AHS technology on its Caterpillar brand vehicles.

“We are excited to be starting a new chapter in our automation journey with a valued long-term partner in Caterpillar and we are proud to be extending our successful partnership with Komatsu on this world-first retrofitting initiative,” said Rio Tinto Iron Ore chief executive Chris Salisbury.

“Rapid advances in technology are continuing to revolutionise the way large-scale mining is undertaken across the globe. The expansion of our autonomous fleet via retrofitting helps to improve safety, unlocks significant productivity gains, and continues to cement Rio Tinto as an industry leader in automation and innovation,” he added.

AHS allows trucks to be operated by a supervisory system and a central controller, rather than a driver sitting in the cab. It uses pre-defined GPS courses to navigate roads and intersections and the system knows actual locations, speeds and directions of all vehicles at all times.

The retrofitting project is part of the miner’s $5 billion productivity programme. The company said it had already aggregated more than 3,500 employee ideas in the company’s productivity pipeline, “many of which will deliver cost benefits”.

Further expansion of the autonomous fleet is being considered.

“We are studying future additions to our autonomous fleet in the Pilbara, based on value, to help deliver our share of $5 billion of additional free cash flow for the company by 2021. Rio Tinto is committed to working closely with our workforce as we transition to AHS including providing opportunities for new roles, redeployment, retraining and upskilling,” Salisbury said.

Australia’s mining companies are rapidly expanding the use of autonomous vehicles and equipment.

In November, miner Roy Hill CEO Barry Fitzgerald said the company would be making its giant pink trucks autonomous from next year. Six further drills will also be automated in 2018 (three are currently).

Fortescue Metals' in June announced plans to up the number of driverless trucks at its Solomon and Chichester sites. In July, Mining Magazine reported that BHP would be doubling its autonomous fleet at Jimblebar, also in the Pilbara.