As those who have worked with mainframes for decades near retirement, a skills gap looms large 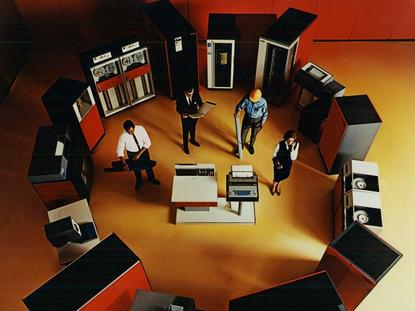 In the Autumn of 1969, a nervous Paul Matthews sat in a government office in Canberra having answered a job ad for a ‘trainee computer operator'. The interviewer's first question: Have you ever seen a computer before?

Matthews ended up being one of a cohort of 40 to use a then revolutionary IBM System/360 mainframe, a Model 20. It had 4K of main memory, two magnetic tape drives and all data was processed via punched cards.

Modern mainframes are unrecognisable from the ones seen in those early days of the technology. The IBM z14, which Big Blue shipped to Australia in October, has up to 32 terabytes of memory and boasts the world’s fastest microprocessor, according to its maker, at 5.2GHz.

But the people that work with the machines, like Matthews, are very much the same.

While mainframes look set to run core processes within Australia's biggest businesses for many years to come, the men and women that keep them running are now "thinking of their stamp collecting" as Matthews jokes, and about to retire.

A skills crisis, feared for a decade or more, is now beginning to bite. And hard.

“There is a missing generation of skilled mainframe blokes and sheilas," Matthews says. "There is a definite skills shortage looming.”

For more than 50 years ‘Big Iron’ has been relied upon to host mission-critical applications for banks, airlines, insurance companies, logistics firms and government.

Australian companies were among the first in the world to order from the IBM System/360 range – Holden, real estate agent LJ Hooker, chemical company ICI and Qantas among them. Although mainframe customer numbers rose and fell over the years, the big end of town has for the most part stuck with the machines.

The latest global BMC mainframe survey of executives and technical leads found 91 per cent of respondents saw the mainframe as a “long term, viable” platform (an increase from the previous year) and fewer (22 per cent down from 36 per cent) were planning to migrate workloads off the platform.

There are 63 mainframes (insourced and outsourced) in Australia and they aren’t going anywhere soon. In the past 12 months alone the Department of Human Services, Australian Taxation Office, Queensland Government, and South Australian Government have all signed, sought or extended major mainframe deals.

According to IBM, the dominant player in the market, its mainframes run 68 per cent of the world’s production workloads, handle 87 per cent of all credit card transactions – meaning “just about everyone has used a mainframe computer at one point or another,” the company says – and are used by 44 of the top 50 banks and 18 of the top 25 retailers.

They are highly dependable (a joke among those that work with them is that ‘uptime is measured in years’), secure and scaleable. They are still able to run programs written in COBOL in the sixties, and some still do.

Despite the mainframe's central and enduring position in the enterprise – or perhaps because of it – new blood is not joining the specialist workforce.

"The biggest issue is that they sit in the background they do their jobs day in day out and don't cause any problems and tend to be forgotten," Matthews says.

"We as mainframe men have not done a good job of promoting the mainframe even though it's been severely modernised," he adds.

That’s becoming a serious problem for many companies. According to BMC, nearly half (47 per cent) of the mainframe workforce is aged over 50. Only seven per cent are under 30.

‘Staffing and skills shortage’ was reported as the top challenge (second only to software costs) of survey respondents.

“Tick, tick, tick…the pending retirement of millions of baby boomers over the coming decade is significant enough that organisations must look at the implications of this transition,” says analyst Mike Chuba.

“Many organisations will remain heavily dependent on their mainframe operations to support mission-critical business requirements for the foreseeable future, and should be taking actions to ensure adequate personnel for the next five to 15 years,” he adds.

Matthews’ business card is big and holey. As a nod to the early days of mainframes, it is made to look like a punched card. Above his name and contact details is written ‘Column 72’ the name of the organisation Matthews established to help ease the impending skills crisis.

[On early mainframes, thousands of punched cards were read to execute a simple program. Any non-blank character in column 72 indicated that the next card in the stack was a continuation of the present card.]

Column 72 runs a mainframe trainee program, on which graduates of college and university computer science courses go to work for an IBM mainframe customer over three years while completing a Bachelor of Information and Mainframe Technology from the University of Canberra.

It is a revival of a similar initiative ran in the noughties which came to an end due to the global financial crisis, but not before graduating 262 students,.

“There's plenty of stuff you can do with the mainframe but there's too many young blokes and sheilas who have come along who have only come up in a Microsoft environment and of course now you get a lot of young people coming up who only know about AWS,” Matthews says.

Rajeev Bajania is a graduate of the earlier initiative, who now works as a mainframe systems programmer for the Department of Human Services.

“The mainframe is the most exciting piece of technology which keeps on evolving and still maintains backward compatibility. They are victims of their own success. With zero downtime and it working silently in a corner without any issues, no one notices it and people take it for granted.” Bajania told CIO Australia.

Bajania says while career prospects in the specialism are limited, and like other IT roles under threat from outsourcing and offshoring, “with an aging population it is growing”.

Jayrick Ngai, another Column 72’er who works with the Northern Territory Government’s Department of Corporate and Information Services said mainframe roles were “more rewarding” than others in IT.

“You get to work with colleagues that have been working on mainframes for decades and still love their job and learn from them too,” he said.

The mainframe isn’t budging. “Enthusiastic adoption” of IBM’s latest Z14 was a significant contributor to the company’s latest profits. Bajania and Ngai both reported previous roles involving reinstating major mainframe applications (“This is after a failed project worth tens of millions of dollar in losses to turn off the mainframe app,” Ngai said) or moving workloads from mid-range servers to mainframes.

Westpac, the Reserve Bank of Australia, Harvey Nash, Suncorp, a number of government agencies and Bankwest are all currently seeking people with mainframe experience.

They might not be considered cool, but they are needed. As Ngai put it, mainframes “more importantly do not have an image problem to the client who uses it to meet their requirements”.

Applications for the next cohort of Column 72 trainees open in April. Visit www.column72.com for details.