Optus prepares for 5G liftoff in Australia next year 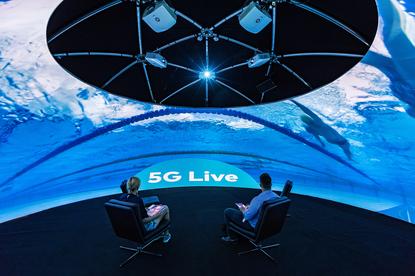 Optus CEO Allen Lew said the upcoming rollout of the 5G fixed wireless service - slated for early 2019 - will give people an alternative to the NBN service.

“The reality is people will have a choice ... NBN is an option. Today, people can already use 4G broadband service and there are multiple service providers. 5G is another option that individuals can choose for their homes or  their businesses, depending on their needs.”

Lew made his comments to the media at the official unveiling of the 5G technology showcase, which is on display at the Gold Coast Commonwealth Games during the 12 days of the event.

He said 5G will be available in Australia to consumers in capital cities starting from January 2019. The first mobile devices will come in the second half of 2019.

At the technology showcase - the telco's first public showcase of a 5G network - a number of use cases are on display including a robotic arm (which uses 5G technology and motion detection to control a mechanical arm); a robot hand that uses superfast speeds and low latency to play ‘rock, paper, scissors’ against attendees; VR football (where users can be immersed in a 360-degree video), as well as VR cycling and VR driving.

Outside the technology showcase, the event also features a Optus 5G van that’s equipped with a widescreen TV that carries a prototype 5G device with the live trial network in operation. The demonstration in the van lets users see how video content can maintain ultra-high frequency quality streaming levels on the move.

“This showcase will help us see how consumers react to a virtual reality environment and how customers react to robotics,” Lew said, explaining the team is inviting consumer and business feedback about desired services.

“As a next generation telco, we cannot just be providing a connectivity service. . . We believe that with 5G we are opening a door to allow us to move from being just a connected service.”

On the business front, Lew said the key thing that customers get with 5G - which they don’t get with 4G - is much lower latencies.

“Robotics is just one example of what enterprises can do with 5G technology. This is ideal in a mining environment, for example. The person driving the mining vehicle doesn't have to be in the mine. They can be sitting in Brisbane, but still driving the vehicle up in a remote part of Queensland.”

Optus Business managing director, John Paitaridis, told CIO Australia, businesses can take advantage of many use cases - from IoT to smart robotics to VR and AR - as the rollout of the upcoming 5G wireless network gets closer to reality.

“There is intense interest from enterprise in and around 5G. The technology leaders of Australia’s leading organisations, and even some of the government-based organisations, see the potential of a mobility network that has capacity, availability and latency the likes of which is a step-change from where we’ve been with 3G and 4G.”

He said companies today are fixated on digital transformation of the business and thinking largely around operational assets.

“In the case of manufacturers, mines, or logistical organisations, we are in proof-of-concept conversations with many of these companies,”he said, indicating they are keen on talking about smart robotics and how they can be remotely managed via a 5G high-availability, low-latency network.

“They want the ability to have remote automation and or diagnostics through the mobility networks.”

He said organisations need to get ready for the future mobility network and start identifying use cases.

“We can all talk in the theory of what networks are capable of and some of the outcomes these organisations are trying to achieve, but we have to get into the specific use cases and start to deliver a proof-of-concept for enterprise.”

Asked whether the NBN is a threat - and whether some organisations may be locked into that journey - he said tech leaders are open to alternatives.

“Most enterprise organisations shouldn’t feel constrained by the underlying network infrastructure. What they’re more interested in is the applications that are capable over infrastructure.

“And if you present an infrastructure alternative, or a network alternative, which is faster, better latency, more availability and greater capacity - and can drive machine and automation outcomes for the business - then I think technology leaders are interested in leaning in on that opportunity. And it will be a source of differentiation for those organisations that are starting to map their strategies.”