Trump doesn't want to dictate "what is researched and developed." - US tech policy advisor Michael Kratsios 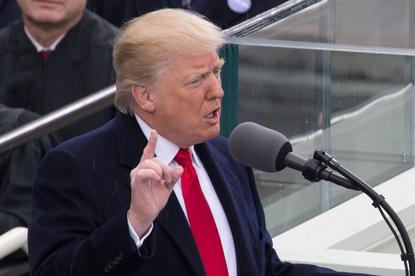 Trump government won't stand in the way of AI

The Trump administration will not stand in the way of the development of artificial intelligence in the United States, a top official said on Thursday, while acknowledging that the burgeoning technology will displace some jobs.

At a White House summit that included companies like Alphabet's Google, Facebook and Amazon.com, technology policy advisor Michael Kratsios said the administration of President Donald Trump did not want to dictate "what is researched and developed."

"To the greatest degree possible, we will allow scientists and technologists to freely develop their next great inventions right here in the United States," he said, according to a copy of his remarks provided by the White House.

Kratsios acknowledged that "to a certain degree, job displacement is inevitable."

He added: "But we can't sit idle, hoping eventually the market will sort it out. We must do what Americans have always done: adapt."

The White House, which has previously clashed with scientists over issues such as climate change, conservation and budget cuts, said it would create a new committee on AI. It will be comprised of the most senior research and development officials across the US government, tasked with looking at R&D priorities and better coordinating federal investments.

"We cannot be passive. To realise the full potential of AI for the American people, it will require the combined efforts of industry, academia, and government," Kratsios said.

"In the private sector, we will not dictate what is researched and developed. Instead we will offer resources and the freedom to explore," he added.

Intel Corp chief executive Brian Krzanich, who attended the summit, said in a blog post that "without an AI strategy of its own, the world's technology leader risks falling behind."

AI is already being used in a number of fields. For instance, the National Institute of Health is exploring ways machine learning can improve cancer detections and treatment, while the General Services Administration is using AI to reduce the need for federal auditors, the White House said.

The Pentagon and various U.S. departments took part, along with senior White House officials including Jared Kushner and Andrew Bremberg, who heads the Domestic Policy Council.