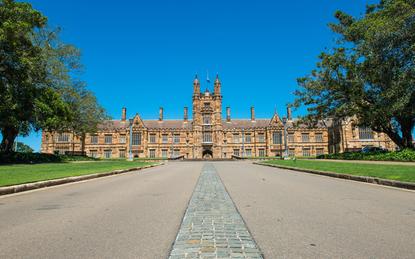 The University of Sydney

Dell EMC has taken the wrappers off the $2.3 million supercomputer upgrade it rolled out for the University of Sydney earlier this year, with the new high-performance computing (HPC) system set to support research in a range of disciplines, including geophysics and cosmology.

While Dell EMC and the university partnered up directly to implement the upgrade to the institution's existing Artemis HPC cluster, NTT Data acted as the project’s integration partner, working with Dell EMC for the software installation and integration needed for the system upgrade to see the light of day.

The multimillion-dollar system now has an Rpeak – or theoretical peak – performance of one petaflop and an Rmax – or maximal achieved performance – of 700 teraflops, which is expected to give the university the processing power needed to provide answers to scientific questions to which it had previously been unable to find solutions.

The university’s latest supercomputer upgrade, the infrastructure for which was installed before the end of January, is intended to augment the capabilities of the institution's Artemis 2 system, also built on the Dell EMC PowerEdge compute platform.

As reported by sister publication Computerworld, the university's Artemis HPC cluster was originally launched in 2015 with 1512 cores of compute capacity and comprises 56 standard compute nodes and five GPU compute nodes.

It is understood that the Artemis 2 system, the result of an upgrade in 2016, had been increasingly considered less suitable for the university’s emerging AI and machine learning research, largely because it lacked the computational power put out by the dedicated Nvidia Tesla GPU cores that the Artemis 3 now boasts.

“The addition of advanced deep-learning capabilities to our Artemis supercomputer – thanks to the Dell EMC PowerEdge C4140 – is a mission-critical dimension of our research infrastructure,” the university’s Sydney Informatics Hub’s deputy director Professor Geraint F Lewis said.

“With a greater number of research problems being data-driven, or more accessible because there is data, our researchers will be able to investigate questions that were previously unanswerable,” he said.

Artemis 3 will be used to aid research in areas as diverse as geophysics, cosmology, genomics and proteomics. It will also be used in emerging areas that are heavy on big data analytics, such as economics, transport logistics and medical imaging.

The new hardware is also expected to support the work of the multimillion-dollar Ubtech Sydney Artificial Intelligence Centre, which was set up to help solve some of the major challenges in AI and robotics.

The completion of the university’s HPC cluster upgrade comes just three months after the $4 million supercomputer built by Dell EMC for Swinburn University of Technology in Melbourne went live, with the university officially launching the new system on 7 March.

That system, named OzSTAR, is based at Swinburne’s Hawthorn campus and features a performance peak of 1.2 petaflops.