Checking in with the chatbots

How well are virtual assistants doing on the frontlines of customer service? So-so suggests survey 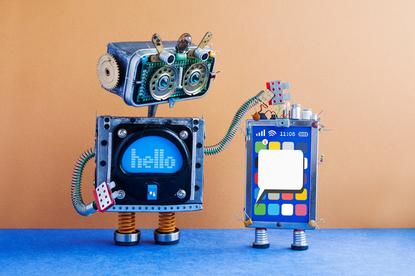 The rise and rise of chatbots in Australia has been impressive. Recent roll-outs of virtual assistants include NIB Health Funds’ Nibby, Domino's Pizza’s DRU Assist, and Jetstar’s chatbot Jess.

Banks are particularly fond of the technology, with UBank’s RoboChat, NAB’s “digital virtual banker”, CBA’s Ceba and AMP’s Rosie among those implemented in customer facing roles.

Their benefits are numerous. They provide customers with faster access to information and instant resolutions; are easier to deal with than static web pages; and are available 24 hours every day.

There’s research to suggest that consumers of all ages now prefer to text or IM than call, and self-serve online rather than talk to call centre (which might say more about their typical call centre experience).

For businesses they can take on the grunt work for customer service departments, leaving human staff – of which fewer are needed – to deal with more complex problems.

In Australia and globally the rise of chatbots is expected to continue, with Gartner predicting that within two years, a quarter of customer service operations will involve the use of virtual customer assistants.

Grand View Research forecasts the chatbot market will be valued at US$1.25 billion by 2025 – a compounding annual growth rate of 24 per cent.

So how are Australia’s chatbots doing on the frontlines of customer service? A MuleSoft survey of 1,000 Australian consumers published today shows mixed results.

“While many organisations are adopting chatbots, improvements need to be made to ensure this new technology is effectively responding to customer needs,” said MuleSoft APJ vice president Will Bosma.

The survey found that 43 per cent had engaged with a chatbot when contacting an organisation over the last 12 months, most commonly when interacting with a retail company, bank, insurance provider or government.

More than a third (35 per cent) of those that had said their query had been completely resolved or answered.

However, more than a fifth (22 per cent) said the chatbot was unable to resolve or answer the query as it didn’t have access to the necessary information or systems.

And of those that had engaged with a virtual assistant, 27 per cent were asked to call a customer service representative directly and 14 per cent said they were directed to a web form.

“This clearly indicates that the overall chatbot experience is still a work in progress and that chatbots will only realise their true potential once the technology has become more intelligent. This will only be accomplished by connecting chatbots to more systems and a greater range of data,” Bosma added.

Separate research by Publicis Groupe’s DigitasLBi found that 73 percent of survey respondents said they would never use a chatbot again if they had a bad experience during their first encounter with it.

Despite the underwhelming experience, the MuleSoft survey responses suggests consumers are happy to converse with a robot if it means the level of customer service is superior to that provided by a human.

Half of Australian respondents cited 24/7 customer service and not having to wait on the phone as the biggest benefit of chatbots with a similar proportion naming quicker answers to queries as an advantage. The ability to jump in and out of chatbot conversations while doing other things was also a highly rated benefit.

Consumers are also optimistic about the future benefit of chatbots with 79 per cent saying they believe virtual assistants will be able to offer a superior level of customer service in the future.

Respondents were less keen on using popular messaging services such as WhatsApp, Viber, Facebook Messenger, or iMessage to interact with organisations; particularly banking, insurance and government.