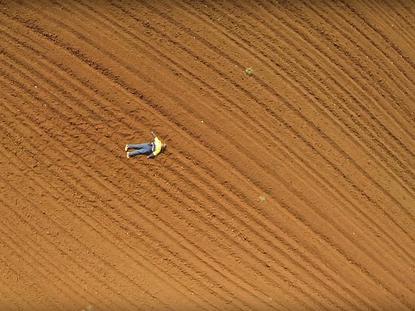 None of the 11 teams that flew in this year’s Medical Express Challenge for unmanned aerial vehicles was able to complete the mission, leaving the potential $75,000 prize money unclaimed.

The challenge – which organisers describe as ‘one of the most challenging aerial robotics competitions ever devised’ – is the gala event of the biennial UAV Challenge, which took place last week in Dalby, on the Darling Downs in Queensland.

The team from Monash University – Monash UAS – was ranked highest in the competition, finishing less than a point ahead of Team Dhaksha, from the Madras Institute of Technology campus at Anna University in India.

The ranking was described as “the tightest UAV Challenge result we have had for the adult competition since the first contest in 2007”.

The challenge requires teams to retrieve a blood sample from a sick farmer – portrayed by a mannequin named Outback Joe – and take it to a lab.

While teams are given the address of the farmer, their drones must land within 40 metres of a target he has printed, but not before passing through a number of waypoints, remaining within a geofenced area, and while avoiding any ‘static no-fly zones’.

After Outback Joe has placed his blood sample in a compartment on the drone, he then activates a switch. A minute later, the drones must make their way back to base.

To make things harder the whole mission – a 44.5 kilometre round trip – must be completed by the drone autonomously.

In a new twist this year, teams could also opt to complete the mission while avoiding ‘dynamic no-fly zones’ designed to represent other airspace users.

Monash UAS, successfully landed within 10 metres of Joe’s target, but a technical issue meant they had to command their aircraft to take-off from the farm “and hence the take-off could not be deemed autonomous”.

Team Dhaksha meanwhile failed to land within 10m of the target, instead touching down 30 metres away “in the next paddock and on the other side of a fence”.

“Both teams were superb,” organisers said, “both teams did achieve amazing mission flights and are congratulated on these fantastic achievements”.

An airmanship award went to Griffin UAV for their attitude and decision making abilities, while Canberra UAV was given an incentive award for performing best in the ‘dynamic no-fly zones’ challenge.

“Not only did their aircraft travel nearly the entire length of the course avoiding virtual dynamic obstacles, but Canberra UAV also shared all of their computer code with other teams. Their attitude to sharing everything and progressing the field of low-cost UAVs for civilian applications is commendable,” organisers said.

A number of the Canberra UAV team is behind the widely-used open-source autopilot software Ardupilot which keeps more than a million multi-copters, fixed-wing planes, and helicopters up in the air.

The Medical Express Challenge has been running since 2015, inspired by the ordeal of a real life farmer, on whose property the competition is held.

It is one of a number of competitions that form the UAV Challenge. Among them is the Airborne Delivery Challenge in which high school teams must drop a ‘medical package’ close to a target, with a suitably soft landing.

The winner this year was the Sky High team from Knight High School in Palmdale California. The school is named after famed test pilot William J Knight, who still holds the world speed record for flight in a winged, powered aircraft.

The UAV Challenge is organised by the Australian Centre for Robotic Vision at Queensland University of Technology and CSIRO’s Data61. Sponsors include the Queensland Government, Boeing, Insitu Pacific, Northrop Grumman, Lockheed Martin and Defence Science and Technology Group.