Mind your metaphors: Why CIOs’ choice of corporate jargon counts

The honeymoon’s over, we’re jumping hurdles and heading into battle 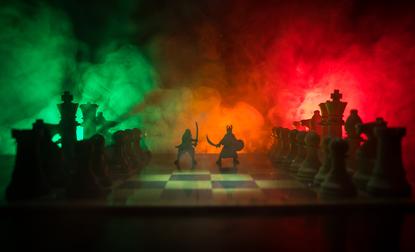 If you work in corporate Australia, chances are you've heard one this week. Whether picking the low hanging fruit, riding out the storm or rallying the troops; metaphors pepper every workplace’s internal communications.

Metaphors tap into ‘prior knowledge’ and the right ones can spark activity in regions of the brain making messages more memorable or inspiring. CIOs can also use them to draw information from staff they wouldn't otherwise reveal.

We often use them without thinking, but they should be used with care. Studies have shown when managers use metaphors from certain themes; they can change team members’ perspectives, and have a negative effect on project outcomes.

In a 2016 study, researchers from Aalto University in Helsinki and Copenhagen Business School examined the metaphors used by different project team members – stakeholders, software developers and managers – working on a major public sector IT project in Finland.

They recorded a diverse collection of metaphors being used by those on the project, which they categorised by theme. The researchers discovered that the themes of the metaphors used changed depending on an individual’s job role and at what phase of the project they were interviewed.

For example, during the requirements phase of the three year, records management system project, managers often used war-related phrases; like ‘setting up border fences’, there being different ‘camps’, and ‘preparing for battle’. The developers on the other hand tended to use family-related phrases like team members being ‘like a married couple’ and ‘honeymoon period’ or else used journey-related metaphors like ‘down the path’, ‘back tracking’ and ‘moving train’.

“Many of the project members had been involved in previous efforts in the same domain…It is possible that the long and weary previous projects had prepared the participants for a long and difficult ‘battle’,” the researchers wrote.

“While the managers were mentally readying themselves for ‘battles’, the project employees were bonding as a unit while travelling together, using many metaphors related to everyday life,” they continued.

During the design and implementation phases of the project, however, managers ditched the war talk for other metaphor themes including religion (a costings document was referred to as ‘the Holy Word’), nature (some devs were ‘on another planet’) and games (‘shadowboxing’ and ‘acting as a referee’).

The developers during these phases adopted the war metaphors, and spoke of ‘picking their battles’, ‘civil war’, being ‘shot at’, and ‘bombs falling’.

The researchers suggest the managers’ use of war-metaphors spread rapidly through informal conversation.

“Because these metaphors were not brought up in official meetings or written in protocols, their spread can be far more insidious than if they were part of the official change strategy,” they wrote.

In any case, the spread of metaphors changed the ‘sensemaking’ among workers. For example, “because the war metaphor entails winners and losers, it can lead to threats, coercion and manipulation and is, overall, destructive by nature,” the researchers wrote.

The researchers suggest metaphors from alternate themes might be safer.

For instance, “the family metaphor can highlight that people with different goals can co&dash;exist in a project. This suggests the importance of political negotiations, consensus building and compromise – family members can disagree but still be supportive of each other,” they wrote.

Battle-talk can be used to get staff rallied behind a single aim, however. Speaking to CIO Australia last year, NAB’s chief technology and operations officer Patrick Wright spoke of ‘patriots and mercenaries’ when describing an in-sourcing strategy.

“Patriots are those that are fighting for their homeland. I think it’s really important as we shift our workforce around that we build a technology organisation that is filled with patriots,” he said.

Gartner recommends chief information officers use and invoke metaphors when they are questioning colleagues about what is and isn’t working during a change initiative or major project.

One of the issues faced by CIOs is their seniority often means they are “too remote from problems or issues occurring at the front line” and suffer from the ‘authority filter’ present in large organisation that keeps them unaware of bad news.

“The higher the leader ranks on the organisation chart, the less likely it is that people will come to him or her with problems,” a research note from November last year states.

“…asking directly about the health of the change can be intimidating for many, as many behave evasively, especially if the CIO and IT leaders have not built a sharing group across the enterprise,” it continues.

The note’s author, Gartner research director Daniel Sanchez Reina – a former CIO of Sony Europe – suggests selecting different metaphor themes for different types of question. Taste should be used when questioning about motivation and forward motion metaphors for gauging progress. Texture-based metaphors should be used when delivering calls to action.

Taste metaphors are known to recruit areas of the brain associated with emotion, making them a useful tool in gauging motivation, which itself is “sometimes difficult to perceive because it lies in the emotional arena and is seldom visible,” Sanchez Reina’s paper states.

Taste-based questions around motivation might include; what are the sweetest benefits of this change? Is there anything about this project that makes you bitter? Tell me something that is making you bitter.

Forward-motion-related metaphors, meanwhile have been found to subconsciously activate a sense of achievement in the brain.

CIOs can use this to their advantage, Sanchez Reina says, using such metaphor laden questions to not only assess the difficulties teams might be encountering, but also “awaken their desire to succeed”.

Such questions might include: How far down the track are we? Are you swimming against the tide? What potholes are we running into?

A motion metaphor has been utilised to great effect by Sydney Water CIO George Hunt. Describing the utility’s transformation effort, he told the CIO50 event in November: “I often say we’re trying to upgrade an aircraft whilst it’s in flight. And if we’re trying to upgrade the aircraft – the customer travel experience at the same time we’re changing the engines to up efficiency – then I basically say ‘are you okay being a glider for a while?’”

ANZ’s group executive, technology, Gerard Florian, meanwhile has used phrases such as ‘oil tanker to speed boat’ and ‘teaching the giant to dance’ to describe the bank’s technology transformation.

Texture-related metaphors, when heard, are understood to activate similar areas of the brain as actually sensing the texture through touch. Using them “allows us to convey messages that generate more noteworthy and impactful memories” Reina Sanchez says.

Pleasant and unpleasant texture can be evoked: It’s been a hairy time, a smooth transition, a rough year.

“CIOs can resort to the power of language in smart, original ways,” Reina Sanchez writes. “Metaphors…act as powerful tools to motivate and generate calls to action in impactful ways. However, metaphors should not be overused. Use them surgically as necessary; otherwise, they may sound exaggerated and lose their impact.”