Microsoft aims HoloLens 2 at the enterprise 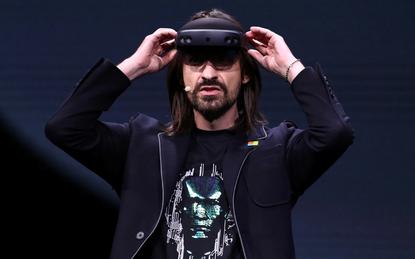 Microsoft this week unveiled a slimmed-down, more powerful and easier-to-use HoloLens headset as it aims to boost uptake of its “mixed reality” technology by businesses.

The HoloLens 2 was introduced by Microsoft CEO Satya Nadella at Mobile World Congress (MWC) in Barcelona on Sunday; it builds on the original HoloLens, which launched in 2016.

With the new device, Microsoft promises a more immersive and comfortable user experience thanks to a range of hardware improvements and a richer software ecosystem.

Analysts say the new device could build momentum for augmented reality (AR) technology that has so far failed to get serious traction.

“HoloLens is the major shift that the AR industry has needed,” said Anshel Sag, analyst at Moor Insights & Strategy. “It has so many of the key technologies that I see as needing to be standard for the future of XR.”

The device is aimed squarely at workplace applications, such as with factory workers and executives collaborating remotely. “It was obvious from [the] Microsoft announcement at MWC that the company is very clearly focused on enterprises and business use cases,” said Annette Jump, research director at Gartner.

With that in mind, the HoloLens 2 is said to be more comfortable to wear for prolonged periods (the device lasts between two and three hours per charge) due to a more ergonomic design and carbon-fibre frame.

It is now possible to wear regular eye glasses with the headset on, for example, and to flip the visor up to let wearers engage in face-to-face conversations with colleagues or switch tasks without having to remove the headset entirely.

Microsoft has also doubled the field of view (FoV) compared to the original HoloLens – one of the major issues cited by users – and added new features including eye-tracking to scroll through menus hands-free and a retina-scanning login for Windows Hello.

“Virtually every complaint I can think of about HoloLens 1 has been addressed,” said Sag. “Be it FoV, performance, weight, balance, comfort and battery life, the company has addressed those concerns with this model.

“Obviously, there's still room for improvement to widen FoV further both horizontally and vertically, but I believe that this version is good enough to no longer be considered a shortcoming.”

While less clunky than its predecessor, the new device is still not small. While Jump also welcomed the enhancements such as field of view, she said continued improvements to battery life (beyond two or three hours of active use) and lighter hardware will be welcomed in the longer term.

Interacting with the device is easier than before, said Microsoft; the ability to grab and rotate holograms is more natural, as opposed to learning specific gestures.

“For the first time, you’re going to feel what it feels like to touch a hologram, to interact with a hologram and to play with it, almost where you forget that this is a piece of digital content you’re looking at as opposed to it just existing in the real world,” Alex Kipman, technical fellow in Microsoft’s Cloud and AI group, said in a blog post.

The Redmond, Wash. firm will work with partners to adapt the technology to the needs of vertical industries, starting with an off-the-shelf solution from Trimble, which has created a hard hat for construction workers with HoloLens built in.

The U.S. Army is also tailoring the latest version of the mixed reality headset for combat uses – a $480 million deal to supply up to 100,000 devices that has been criticised by a group of Microsoft employees (and subsequently defended by Nadella in a CNN interview on Monday.)

The availability of software tools is another critical component for the success of AR in the workplace.

"The key to unlocking the potential of HoloLens is the developer community,” said Nick McQuire, vice president for enterprise research at CCS Insight. “Microsoft already has an enviable position in this regard and the financial resources to really incentivize developers to invest in the platform."

Last week, Microsoft said it plans to bring adapted versions of the two apps to Android and iOS devices, in a bid to broaden access to its AR software.

At MWC the company also introduced a new app, Guides. It’s designed to help employees such as skilled factory workers learn their jobs more quickly, speeding up the employee on-boarding process. (Training is seen as one of the primary uses for virtual and augment reality: Walmart, for example, has deployed 17,000 Oculus Go headsets to help get new employees up to speed.)

Microsoft also highlighted apps being created by its partners. Spatial, a company that sells real-time collaboration tools for AR devices, has created an app for HoloLens 2 that uses the improved hand-tracking and eye-tracking to interact with product holograms and “sticky notes” during virtual meetings.

A partnership with industrial software application provider PTC will shorten the time taken to create mixed reality experiences by incorporating existing 3D model assets, while a collaboration with Phillips focuses on the use of mixed reality by surgeons in the operating room.

Partners could play a key role in the success of the HoloLens 2, according to Sag. “I believe there needs to be a very tight partnership between Microsoft, their partners and their partners' customers,” he said. “This appears to already be happening with Microsoft's first four partners they have announced.

“I expect that hardware and software customization will be important for many of these highly regulated industries. They also need to ensure that workers' workflow is the same or better than it was before HoloLens' introduction.”

Despite interest in the technology, consumer sales of augmented reality and virtual reality devices has so far failed to match expectations.

But there are signs of stronger growth, mostly attributed to the enterprise space. Commercial deployments will account for the majority of the $20.4 billion forecast to be spent on AR and VR devices in in 2019, according to IDC; that’s up from $12.1 billion last year. Still, most enterprise deployments remain at the pilot project stage.

"This is a critical moment in Microsoft’s ambitious plans for HoloLens and for mixed reality in general,” said McQuire about this week’s launch. The combination of specialised apps, developer tools and an improved headset “may just help mixed reality move beyond its niche, science experiment status inside companies,” he said.

“The [HoloLens 2] announcements show us that we are now entering the next phase of computing experiences with immersed and mixed reality at the core and this phase will likely be incubated in the enterprise first,” said McQuire. "The big question is, can Microsoft succeed where so many others have failed in augmented reality?”

Mark Sage, managing director of AREA – a non-profit group focused on adoption of AR technology in the enterprise – said the improvements  will “help deliver use cases and benefit for enterprises,” and “overcome some of the technology challenges faced by enterprises who want to deploy AR across their organisation.”

However, he added that, along with technological improvements, the AR sector as a whole needs to focus on removing business barriers to wider adoption, such as concerns about safety and security and the lack of data on a return on investment.

HoloLens 2 gets a price cut

At US$3,500 for the headset only, HoloLens 2 is more affordable than its predecessor, which was priced at $5,000 for the commercial version at launch.

The device is also available as part of a subscription model that includes Dynamics 265 Remote Assist. Prices start at $125 per user per month.