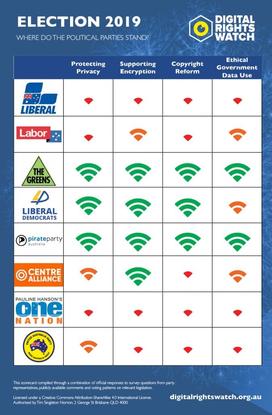 Non-profit Digital Rights Watch (DRW) said the Morrison government has failed on all digital issues from protecting privacy to supporting encryption, copyright reform, and ethical government data use. The LNP scored a 1 out of 3 consecutively (no support/no information) on the issues listed.

DRW sent a survey to all major political parties to examine their public policy platforms and analyse prior voting history to come up with the scorecard.

LNP was joined by Pauline Hanson’s One Nation, which was closely by the United Australia Party. Australia’s Labor party came in third worst -- trailing behind the Centre Alliance Party.

The top two contenders for political parties with the best scores were the Greens Party-- averaging scores of 2.8 out of 3.0 for its (conditional) support on encryption, copyright reform, and ethical government data use.

However the Pirate Party Australia did slightly better averaging a score of three (full support) on encryption, copyright reform, and ethical government data use.