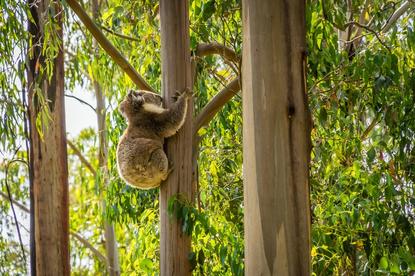 The agency is responsible for more than 3,000 land and marine parks across the state – from marine coastal reef systems, eucalypt forests and alpine areas, to desert landscapes and inner-city parklands – which accounts for 18 per cent of Victoria’s land and 70 per cent of its coastline.

Looking after such a large and diverse area requires a lot of people.The land under Parks Victoria’s management – which attracts 100 million visits every year – is stewarded by 400 park rangers, supported by roughly 20,000 volunteers.

There are hundreds of businesses which interact with and rely on the parks including licensed tour operators, schools, hot air balloon firms, canoe expeditions and cafe owners. There’s also production companies using the parks for their stunning locations, and major event organisers that run the Grand Prix at Albert Park or RSPCA Million Paws Walk.

All those activities need the relevant licenses and permits, they need to be scheduled, volunteers need to be managed and assigned tasks, and rangers need to be rostered so there enough to cover demand.

It’s a “mammoth effort” said Talbot, which until recently had been handled, just, by “many antiquated systems and a lot of Excel spreadsheets”.

The agency is now three-quarters of the way through rolling out a centralised management system for employees and stakeholders called ParkConnect, which has been developed in partnership with Microsoft.

Chiefly based on Microsoft Dynamics 365 for its core customer relationship management (CRM), ParkConnect is not only better managing park processes but allowing the agency to predict demand and track trends in usage, generating “rich insights so we can make informed business decisions” Talbot says.

Complexity on top of complexity

On any given day, a ranger managing a large national park, needs to know how many visitors are due in the coming week, what events are being held, how many and which volunteers are coming to help, what permits need to be completed. There might be a compliance operation with Victoria Police or a major event requiring additional resources.

“It's fair to say that the ranger then had to reach into the organisation to individuals to get that update, they didn't have a dashboard, or a one-stop picture of what was actually happening in their estate. Across 3,000 parks you’re creating complexity on top of complexity and the data is not working for you,” Talbot said.

Critical data was housed on an ageing Access database, while bespoke systems like Tenancy and TOMS were used for leases and licensing and Oracle for financial transactions.

“The previous system was, frankly, a bottleneck. Best endeavours, best intentions, but it was slowing us down and adding complexity to the business,” Talbot explained.

“There were probably some informal ways of getting the information. The rangers did get it, but it was taking maybe two days at a complex site. There were phone calls, spreadsheets moving around, isolated databases not talking to each other, accounting systems not talking to each other, paper going back and forth between desks, or being scanned and emailed back and forth between remote sites, lots of data entry, lots of opportunities for mistakes,” he added.

Around two years ago, Parks Victoria set out to address the complex, sluggish system.

Talbot’s team conducted a series of ‘grassroots workshops’ to find out where all the issues were with the system. As well as considering the benefits sought by the agency, personas were given to various customers to find benefits for them too.

“So you end up with this double whammy, we got a win and they definitely got a win,” Talbot said.

Microsoft was chosen as the vendor of choice (the agency already used existing Microsoft Office 365) and developers were partnered with people in different functions within the agency.

“Let's just go straight to the person who's got the problem and map it out through their eyes,” Talbot said. “We brought rangers in, and we took the team on the road to see the problems at the parks first hand.”

The involvement of rangers was crucial to the success of the project, Talbot said.

“It wasn’t just symbolic. It begins and ends with their interaction at the park level. If the back end makes a mistake…the consequences of that can be quite profound,” he said.

Although the platform is not fully complete, benefits are already being realised. Volunteer group leaders organising activities have had their time reduced from eight hours to two. Monthly reporting on commercial agreements has been reduced from about 12 days of work to just one.

The number of scientific research permits has tripled since the platform has been introduced; now they can be better managed. Automation features in the platform, including the routing of tasks to the correct staff, and preparation of billing information for onward transfer to the accounting system.

“We’re still in the early stages but our rangers are able to sit down every Monday morning, open their dashboard and see exactly what’s happening in the park that week,” Talbot said.

“It ensures our managers have clear transparency into what’s happening across the parks, giving them a dashboard that shows what’s pertinent in their area at any given moment, highlighting any safety risk and advising how best to manage it,” he added.

The next stages of the project will bring in predictive analytics and trend-spotting.

“So when can you see a park or an area getting overly loaded you can say here are the other opportunities in the network,” Talbot said. “We can also start to predict the kind of activities people want to do.”

“We’re getting not just better back end data and productivity, we’re getting better engagement and information sharing to forward predict where we need to be investing or be putting more people,” Talbot said.