Varanasi elevated to board level executive at Parramatta Diocese 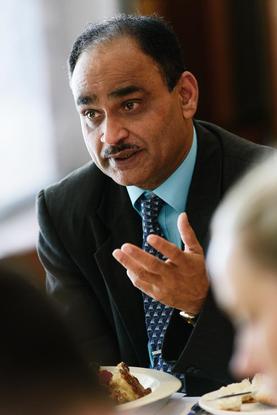 Catholic Education Office CIO, Raju Varanasi, is stepping up and taking on the newly created role of data intelligence director, a position that now sees him sitting at the executive board level at the Parramatta Diocese.

Varanasi told CIO Australia he will be wearing both hats, still performing the CIO duties, but also expanding his remit around data intelligence and now has “a seat at the table.”

In this combined role, he will be responsible for cloud and networks, devices and end user services, analytics and data, applications and security, enterprise service desk, enterprise program office, and change management.

“We are one of the data-driven digital transformation organisations and wanted to give data and intelligence a bigger focus. It is of a very high level of importance,” he told CIO Australia.

“The executive director, the CEO, has taken me after a due selection process as the director, so that means I’m a director of one of the few organisations where the CIO and data intelligence person is at the board level, at the executive level.

“It actually elevates the importance of data decision making. It also speaks to the transformation that we’re working on.”

He said the Diocese has been on a massive digital transformation journey for the last three years.

“We are absolutely on a high-speed transformation of analytics, service desk and cloud. And now it’s coming to a peak, enabling transformation for end users: the students and teachers and parents.”

His CIO responsibilities will include infrastructure, program management, analytics and change management, application and security.

“But all of this means nothing if three things don’t happen: If the intelligence is not converted into action and transformation. If the service to schools, teachers and parents is not excellent. And then the experience. If the CX is not excellent for customers.”

“We are the internal service providers, whether it’s HR recruitment, finance or IT. We are all service providers to schools,” he said, explaining there’s a centralised common approach for all 80 schools in the diocese.

“The executive director - the diocese - is the first to bring the director of data role to that level of security and visibility.”

Prior to working for the Catholic Education Office in 2015, Varanasi was the COO of Education Services Australia, responsible for e-services and operations in the areas of strategy and service development in education.

He was also a former general manager for the DET Centre for Learning Innovation, where he established and led the development of digital platforms and related adoption strategies for school systems and TAFE Institutes.

He was also the director of TAFE NSW Business, Arts and IT Curriculum Centre, where he developed policy advice for current and emerging training and service delivery issues in IT, business, arts and media industries.

In the Parramatta diocese, there are 58 primary schools and 22 secondary schools, two Catholic Trade Training Centres, four Catholic Early Learning Centres and 23 Catholic Out of School Hours Care Centres. There are around 43,000 students and almost 5,000 staff.