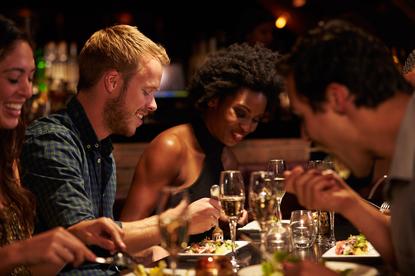 Despite the availability of real-time payments between banks and a proliferation of bill splitting apps, when it comes to divvying up the money for a group meal or round of drinks, Aussies still prefer to use cash, a Bankwest survey suggests.

When asked how they would split a bill when either out for dinner with friends, or buying a round of drinks, respondents of all ages said ‘each person puts in cash’ as the most likely method. Making a bank transfer to the payees account was second most likely, followed by using an app to split the bill.

The only exception to this was Gen Y (or millenials) who were very slightly more likely to make bank transfers than use cash in a restaurant bill-splitting situation.

This is despite all of the 1,001 respondents (residing in New South Wales or Victoria) using apps for weather forecasts (68 per cent said they did so regularly), music (65 per cent) and food orders (45 per cent), Uber (43 per cent), TV (37 per cent) and booking appointments (36 per cent).

Only 14.5 per cent of respondents used an app to split bills.

“These results are illuminating, as they hint at the social circumstances in which people still find physical cash preferable,” said Bankwest executive general manager customer solutions and insights Pieter Vorster.

“Digital solutions have made life more convenient in many cases, but it’s clear there are times when people prefer the simple – and, perhaps, less socially-disruptive – option of physical cash,” he added.

Can you do the splits?

Australia’s New Payments Platform had its public launch in February last year. A feature of the platform is swift money transfers between individuals.

A number of apps utilise this capability to provide bill splitting features. Most of them – including neo-bank Xinja’s split bill feature; Splitr; Easyshare and the bill-splitting feature of Commonwealth Bank of Australia, National Australia Bank and Westpac’s joint payments app Beem It – really make one person pay for the bill in the restaurant, and then request the fair share of payments from their friends which are put into the payers account.

Groupee is slightly different in that the group of diners or drinkers pay the merchant directly after the bill is split in the app. However, all members of the group and the restaurant or bar need to have the app installed.

Usage of the app appears to be low and it hasn’t been updated since November 2017.

In many cases a merchant’s Point of Sale (POS) system can handle splitting bills, but they often choose not to use it. It takes time for staff to divide the bill and take the multiple payments, and often means tips are not added. They also avoid multiple merchant fees by only accepting a single transaction and cash.

This refusal to split bills has been described as a “weirdly, annoyingly Australian phenomenon”.

Just under half of those surveyed by Bankwest said they only carried cash sometimes, or for a specific reason, with the bill-splitting results suggesting a drink and a meal were among those occasions.

“In social situations, splitting a bill by handing over cash might be preferred, as it means you don’t have to stop conversation for account details, or to upskill a friend on digital options,” said Vorster.

“It will be interesting to see if and how those trends change in the coming years, as new digital services are introduced, and technology becomes even more ubiquitous and second-nature.”