Average daily city commute blows out to more than an hour 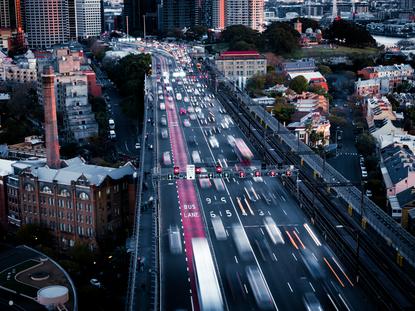 How long does it take you to get to work in the morning? If you’re anything like the average Australian it’s taking you a lot longer than ever before, according to the latest Household, Income and Labour Dynamics in Australia (HILDA) survey.

According to the annual survey from the Melbourne Institute, published today, workers spent 4.5 hours getting to and from work each week at last count (2017), up from 3.7 hours in 2002.

Those commuting in mainland state capitals had much longer travel times than those living elsewhere, averaging at about 66 minutes per day. In 2002 they were spending 55 minutes commuting each day.

“Workers in cities may live relatively close to their workplace and benefit from more public transport options, but they will also often experience traffic congestion,” the HILDA survey of 17,000 Australians notes.

For the rest of Australia, average daily commuting time went up from 49 minutes 17 years ago to an hour in 2017.

The biggest increase in daily travel time was suffered in Western Australia (not including Perth) and the Australian Capital Territory.

Only one place is enjoying shorter commutes: Tasmania, where daily travel times have fallen since 2002 by 1.9 per cent.

A person’s chance of having a long commute of more than two hours a day varied significantly based on other factors. Fathers of two children, who were technicians or professionals and in the 25 to 34 and 45 to 55 age brackets were most likely to have a long commute.

The length of an individual’s commute has a big impact on their job satisfaction, the survey found.

“Spending a lengthy part of the day commuting may impact the way workers perceive their jobs,” the survey, which is funded by the Australian Government through the Department of Social Services, noted.

Long-distance commuters were less likely to be satisfied with their working hours, work-life balance and pay.

The figures suggest “that the additional time spent getting to and from work may often not be compensated through high wages” the report said. Those facing lengthy commutes were also more likely to quit or lose their jobs within the next year.

Other research has tied a longer commuting distance to higher rates of absenteeism and lower productivity.

The survey results come as more and more Australian businesses begin to offer flexible and remote working options to staff.

While some businesses locally have clamped down on workers clocking in from their residence – IBM Australia last year called on workers to spend more time in the office – remote working is on the rise, an International Workplace Group (IWG) study finding almost 70 per cent of Australians work remotely each week, in keeping with global trends.

In March, Atlassian revealed it had begun an Australia-wide assessment of its employees to gauge their suitability for remote working.

Flexible working is ranked as the third most important factor in Australian millennial workers’ loyalty to a company, the Deloitte Millennial Survey 2018 found, after culture and pay. Other research has found up to three quarters favour a workplace that offers flexible working when considering a role.