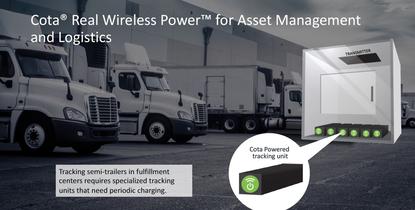 The Federal Communications Commission (FCC) has granted an equipment authorization for wireless power delivery for an Internet of Things (IoT) tracking device.

It's the second FCC certification this year for Ossia's Forever Tracker technology, which the company claims can charge multiple IoT tracking sensors at distances greater than 15 feet. The sensors would be embedded in shipping packages aboard trucks or other vessels.

[ Related: Wireless charging from A to Z: What you need to know ]

The FCC certification enables "Cota" wireless charging technology to be marketed and sold in the U.S. The move also means Cota meets the standards set up by multiple international regulatory bodies who oversee markets where Ossia wants to sell its technology "in the near term."

Ossia is a technology licensing company working with several partners to manufacture products, both batteries and devices across vertical markets, including IoT. There are several more that are currently not public, according to the company.

"The IoT world is obviously growing in monumental leaps and bounds and wireless power is the key to realize IoT’s full potential," a spokesperson said via email.

The Washington-based company is collaborating with T-Mobile and trucking fleet management and tracking provider Xirgo Technologies to develop and market its IoT charging system. Initial deployment is planned at Walmart distribution centers later this year, and commercialization is expected in 2020, Ossia said.

"Walmart and its supply chain are always looking to utilize cutting-edge technology to deliver the best experience to both our associates and our customers," Cameron Geiger, senior vice president of Walmart Supply Chain Services, said in a statement. "With that in mind, we are constantly assessing new ideas and new technologies with the most innovative tech startups and partners. We are excited to work with Ossia's FCC certified Forever Tracker given its unique potential to bring tremendous efficiencies to the logistics and supply chain process."

Unlike today's most popular wireless chargers, which require devices to rest on a charging pad, Ossia is among several companies developing trickle charging capability at distances of many feet. Some of the technologies, also known as "uncoupled wireless charging," can even charge through walls, or simply top off a device as you enter a room.

Ossia's Cota technology uses radio frequency (RF) to send power and data over distances greater than 15 feet. Cota Transmitters can link to charge dozens of mobile devices within a several-meter radius, and the transmitters come in multiple form factors, including a drop ceiling tile.

By linking two Cota ceiling tiles, the system can power mobile devices in a typical coffee shop, office or other crowded spaces, the company said. The latest "Forever Tracking" IoT chargers would be embedded in the roofs of transport vehicles.

"The cost of complex and geographically dispersed deployments and keeping mobile devices continuously powered have historically been barriers for IoT," Mike Katz, executive vice president of T-Mobile for Business, said in a statement. "To address Walmart's massive supply chain with dozens of distribution centers across the country, Ossia is leveraging the unique advantages of T-Mobile's nationwide NB-IoT network, the first in the U.S., to keep devices powered and provide a cost structure that enables deployment on a massive scale."

In 2013, after six years in development, Ossia unveiled the first of its Cota wireless charging prototypes, a small dongle for smartphone charging; at the time, the company said its technology would be available to consumers and enterprises by 2015. That didn't happen. Last year, Ossia again said it expected its first products to ship. That also didn't happen.

Through tiny antennas, Cota-enabled wireless devices can be activated, managed and monitored via the Cota Cloud networking platform. Cota power receivers are small enough to be embedded into IoT devices, wearables and many other electronics.

Ossia is working closely with the FCC for additional certifications, a spokesperson said. Each product that comes to market requires approval from the agency.

"For example, each new smartphone handset will be FCC approved before it hits the public market. Similarly, Ossia is building a relationship with the FCC and other international regulatory bodies to approve the technology that will pave the way for each product’s certification," the spokesperson said.

Last year, Ossia competitor, Energous, finally received FCC approval when the agency certified that company's WattUp radio frequency wireless charging transmitter. In August, in partnership with Delight, Engergous' technology began shipping as part of a hearing aid that could be wirelessly powered up through a charging pad – not over distance.

Still, Energous CEO Stephen Rizzone said the use of the company's RF-based WattUp transmitter – even in a charging pad – shows it can replace today's copper coil-based wireless charging.

"It will also revolutionize consumer electronics product applications where first generation, coil-based charging has not been widely adopted due to its many limitations," Rizzone said in a statement.