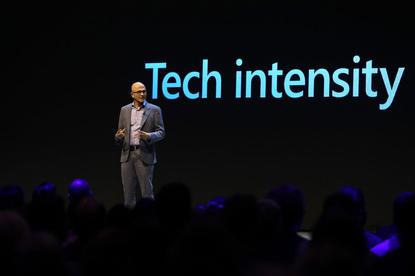 Qantas is working with Microsoft and Altoura on a trial to explore the potential of mixed reality to help train its engineers.

An EGR involves running an aircraft’s engine following maintenance. The mixed reality headset can provide visual cues to aid an engineer, and can ensure that the time spent in simulators, which can cost tens of millions of dollars, is used efficiently.

Microsoft CEO Satya Nadella revealed details of the collaboration today during his keynote address at an event in Sydney.

“Training is perhaps the killer app of mixed reality¨, especially for “anybody who works with their hands on the front lines” and “can’t be off the job to get trained,” the chief executive this morning told the Microsoft Innovate event.

The Qantas trial shows the potential of bringing together the virtual and physical, Nadella said. “By mixing the two media you’re able to now have a simulator that allows you to actually train yourself while you’re at the job,” the CEO said.

The use of mixed reality is not intended to replace an instructor or current physical assessment practices for EGRs, Amanda El Bahou, group learning technology manager for Qantas said in a statement.

“The key purpose is to allow learners to undertake an engine ground run in a safe, simulated environment – demonstrating responses to high risk events.”

The project with the airline is an example of how mixed reality can be used to transform business processes in an enterprise, Nadella said.

The Microsoft CEO said there are increasing examples of front-line workers who aren’t typically issued with a laptop or a phone being given a Hololens headset because of the “direct productivity gain correlation”.

Qantas and Altoura are exploring expanding the proof of concept, including simulating responding to an engine fire.