What are CIOs wishing for this Christmas?

A wishlist for the modern CIO 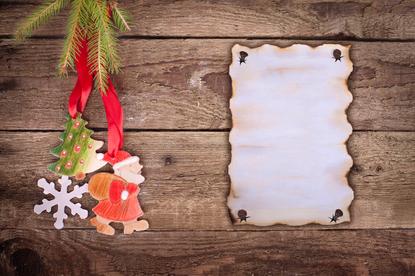 It’s that time of year again for every CIO to reflect and think about what they want for the coming year ahead. No, this doesn't have to involve gadgets or really, really cool technology. Instead, it’s a much broader wishlist that looks at some of the common challenges facing the modern CIO.

CIOs wish that there is always enough money to go around, that their next project will be 110 per cent backed by the finance department and the CFO always takes a relaxed approach when it comes to investing in IT.

Advisory manager Sukalp Sharma wrote for CIO Australia, pointing out the challenge for CIOs to get the budget they need.

“In an ideal world, the CIO would control all IT related expenditure centrally, minimising redundant expenditure and enabling accurate IT costs reporting,” he wrote.

“In reality, however, most organisations have under-the-table applications that are not managed centrally by IT. Quite often, business units have their own supplier relations for the management of such applications, servers or peripheral devices, which do not make it to the IT budgets and fall through the cracks.”

Of course, getting budget means getting in with the CFO. A Gartner survey found that 44 per cent of CFOs’ influence over IT investment has increased since 2010. However, the good news is that the analyst firm also found that CFOs are starting to make IT a high investment priority.

Changing perceptions about IT

CIOs wish all other business executives, without any doubt, see IT as a valuable asset and the champion of moving the business forward through innovation.

A CA Technologies study found that only 17 per cent of CIOs in the Asia-Pacific region are always involved in the strategic decision-making process in their organisations, with almost a quarter of CIOs believing senior executives’ perception of IT as a cost of doing business still exists.

Independent CIO and principal of Starmaster group Bruce Carlos wrote for CIO Australia about the issue of some organisations having traditional mentalities to IT and out-dated attitudes when hiring technology professionals.

“IT needs to lose its unwarranted, dated reputation as a ‘necessary evil’ that is tolerated but rarely understood at the executive level. This flawed attitude to IT leadership is particularly evident when the CIO role is made to report to the CFO, which sends the wrong message: IT is purely a cost centre and not an enabler of growth or a sustainability partner,” he wrote.

CIOs wish all technologies and deployments were simple and straightforward, making the budget and time task a hell of a lot easier to meet.

The Hackett Group found that ‘typical’ companies run more than twice as many data centres as the world-class companies, and run an average of 39 applications for every 1000 end users, compared to just 20 at high-performing companies.

CIOs wish that wooing stakeholders with eloquent language just comes naturally. They wish they could get the most resistant business executives eating out of their hands and ensure all their conflicting needs and priorities will be met.

CIO wrote about the common mistakes CIOs make when communicating with business stakeholders such as speaking in technical jargon, focusing too much on the problem and not the solution, hard selling using scare tactics, failing to ask questions, not making stakeholders part of the process and not adequately explaining the value proposition.

Searching for the right talent

CIOs wish that not only the people with right skill sets are in abundance, but also they are easy to find. They wish the best candidates will come running to them, ready to build a career in the organisation.

At the CIO Summit 2012 a panel of IT leaders gave some tips on attracting and retaining staff, making sure IT teams get the right people and keep them for the long term. This can be focusing on staff’s long-term goals rather than their wage packets, using profile tools and team building exercises, as well as getting to know interviewees personally.

Battling with offshoring versus onshoring

The reality is that offshoring can be cheap, but cheap doesn’t always guarantee long-term success. CIO wrote about GM CIO Randy Mott's announcement this year that he will turn the company’s 90 per cent offshoring /outsourcing of IT services and 10 per cent in-house completely around. The reason? With more staff being in-house, Mott believes he has more control over innovative processes.

Listening to IT vendors

CIOs wish they didn’t have to listen to cheesy, disconnected sale pitches from numerous vendors on a regular basis. They wish all vendors always keep their side of the deal and don’t try to take advantage of the relationship they have with the CIO and organisation.

The CIO Executive Council’s Strategic Partner Index found that of 279 CIOs who provided 743 evaluations of vendors, less than half (46 per cent) perceived their vendors as being truly strategic partners.

Dealing with the feeling that CIO means career is over

The idea of the CIO role dying is far from reality as it is more relevant and crucial to this digital age more so than ever. However, that doesn’t mean at times CIOs can’t help but to feel that if they don’t get on board with the business, they’ll soon be obsolete.

CIOs wish that they will become that business-IT leader and drive initiatives that create value for their organisations.