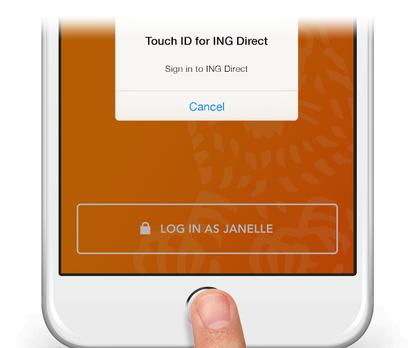 ING Direct is the latest bank to introduce a fingerprint scanning capability on its mobile app. Touch Login lets customers use the fingerprint sensor on their Touch ID-capable Apple iPhones or iPads to securely log in to the mobile banking service.

Suncorp Bank launched a similar capability to its mobile app in August and Westpac did the same last December.

Quoting research by RFI Group, Janelle McGuinness, head of digital at ING Direct, said across all Australian banks, ING’s customers were the most digital engaged with more than 70 per cent carrying out their banking using the app.

“In the past 12 months, the number of customer interactions we’ve experienced through mobile has grown by 90 per cent while online has remained steady. As this appetite for mobile banking grows, we will continue to focus on ensuring our customers’ mobile experience is as simple, straightforward and convenient as possible,” McGuinness said.

One in three mobile and tablet banking users use their mobile or tablet app at least once every day compared to internet banking users who use this service just once per week.

ING Direct’s fingerprint technology is available to users with the iPhone 5s or later, iPad Air 2 or iPad mini 3 or later.